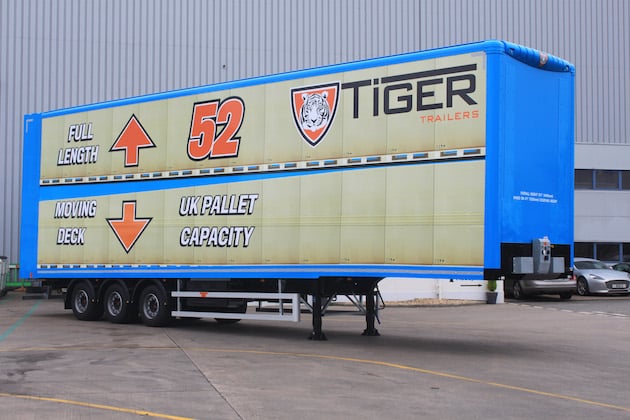 According to Tiger Trailers, the design is the first in the industry to feature a full length moving deck ‘basket’ which is 2,425mm wide, allowing two UK pallets to be loaded side by side.

The deck can be raised and lowered by a 'Siamese-style' ram system developed by Tiger’s R&D team – avoiding the need for cables and pulleys.

“This is one of the most eagerly anticipated trailers to roll off our production line to-date,” said Darren Holland, Sales Director at Tiger Trailers.

“It’s packed full of innovations and has the potential to shake-up the double deck market and transform operational efficiency for fleets.

“There’s been such strong interest in the product that we’ve built a demonstrator to take pride of place on our stand at the NEC, and which we’re making available for customers to trial nationwide.”

The new moving deck double deck trailer will be on display at the CV Show alongside a 44-pallet double deck curtain stand by a trailer due for delivery to XPO Logistics.

Double-deck trailers are becoming something of a trend for the CV Show, which will be held 25-27 April at NEC Birmingham, as Montracon and Transdek have both also announced double deck trailer models to be on display.