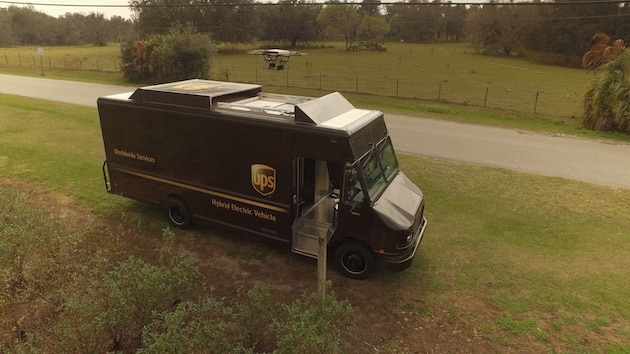 US-based postal service UPS has fitted out an electric truck with a drone launch pad to test drone-assisted delivery.

For the never-before-tried feat, a drone flew autonomously out of the roof of one of the postal company’s iconic brown delivery trucks, carrying a package to its nearby destination.

News site CNET reports that UPS carried out the test on Monday, 20 February in Tampa, Florida.

The drone was loaded with its cargo and exited the truck through a retractable roo and then followed a predetermined autonomous route while the driver continued to another destination to make another delivery.

The drone then found the truck at its new destination and docked itself back on its charging dock on the roof.

“When people ask, ‘When did drones begin entering the delivery space?’ I think it’ll be Monday. It should signal a huge change,” Steve Burns, founder and CEO of Workhorse, said ahead of the test.

By cutting down on the number of stops needed by delivery trucks, the drone technology could help save time and fuel. The model is being considered for rural work, where delivery destinations are often spaced far apart. UPS stated that by trimming just one mile (1.6 km) per driver per day would save the company up to US$50 million (€47.3 million) per year, while also delivering environmental benefits.

Due to legal restrictions around flying objects dictated by the Federal Aviation Administration, it will be a while yet before delivery drones are allowed outside of controlled tests. That said, Burns believes the drone-and-truck technology built by Workhorse could be available as soon as this year.

“We’re studying and understanding the opportunities that this will provide for us,” said Mark Wallace, Ups Senior Vice President of global engineering and sustainability. “So we will continue to look toward the future.”

In January, Mercedes-Benz had unveiled a concept vehicle following the same principle, the Vision Van.