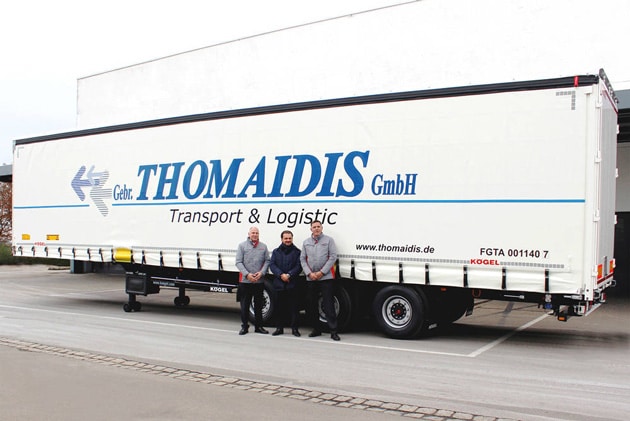 German transport company Thomaidis, which is also represented in Greece, has recently taken delivery of 55 new Kögel trailers to grow its multimodal fleet.

According to Kögel, Thomaidis will be using the new Cargo Rail and Mega Rail models to transport steel and building materials, as well as components for the automotive industry and grouped consignments.

The decision in favour of the new Kögel ‘Roll on, Roll off’ (RoRo) equipment was reportedly made because it can provide the greatest flexibility for transport by road, rail and ship, thus making a considerable contribution towards CO2 reduction and environmental conservation.

The trailers feature a reinforced chassis and special axles that allow for loading them onto rail carriages. Those intended for transport by boat and ferry also feature an 8mm closed slide plate and four pairs of heavy-duty lashing rings for secure storage.

To protect the front walls from interior damage, they are fitted with a 12mm, specially coated safety board.

“Following discussions with all well-known manufacturers, we were impressed … by the total package offered by Kögel. Especially when it comes to the price/benefit ratio, Kögel scored best in comparison with the other manufacturers,” said Thomaidis Director, Georgios Thomaidis.

“The products, especially the good workmanship and material quality, have won our complete approval. An additional and equally important decision-making factor was the excellent, competent advice we received and the helpful attitude of the entire sales team.”