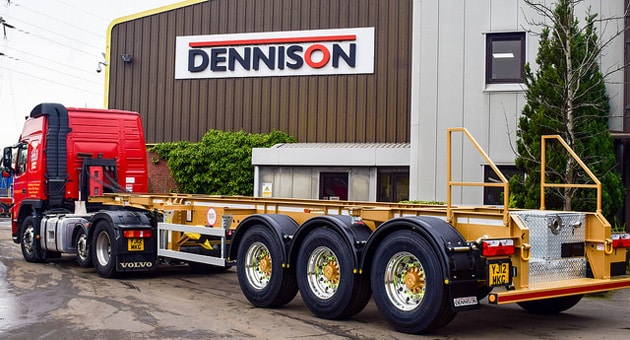 Dennison Trailers has finished off the year 2016 with a major milestone, producing its 50,000th trailer since the company was formed in 1966.

According to Dennison, trailer number 50,000 – a slope frame ISO tank trailer featuring a special gold paint to mark the occasion – has been produced as one of 34 units to be supplied to logistics and supply chain company, Suttons International.

“I'm proud to be able to announce that we've reached such a fantastic milestone, 50 years after Dennison Trailers Ltd was formed,” commented James Dennison, Managing Director of Dennison Trailers.

“We're particularly pleased that the 50,000th trailer has gone to Suttons International, a major name in the haulage industry, and we look forward to producing the next 50,000 trailers that will carry the Dennison name.”

John Sutton, CEO of Sutton's Group said of the milestone: “Working with Dennison Trailers has been a pleasure. They have been very flexible to our requirements and have produced this and many other trailers to our specific requirements

“I am pleased we are able to share in this fantastic milestone with them.”

Based in Lancaster, UK and Naas, Ireland, Dennison has gained renown for developing and manufacturing its own truck model in 1977, and creating a sliding skeletal trailer in 1991.

Today, the company is particularly strong in the container transport sector, but also sees “significant growth” in other markets, such as the steel, timber, oil and construction industries.