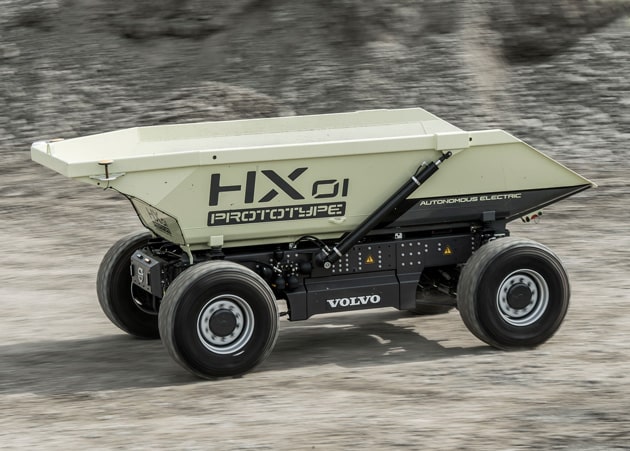 The seemingly inexorable trend toward autonomous driving is slowly spreading into the trailer space, with Volvo Construction Equipment (CE) unveiling what could the world’s first self-driving tipper.

At Volvo CE’s Xploration Forum in Eskilstuna, Sweden, the company recently showcased the prototype of an autonomous electric load carrier for the quarry industry called HX1, which subsequently won the Swedish Institute for Quality’s (SIQ) Quality Innovation of the Year Award.

According to Volvo CE, HX1 is one element of an ‘electric site’ research project that is predicted to cut carbon emissions by up to 95 per cent and lower total cost of ownership costs by a quarter.

“The HX1 concept represents a new approach to a sustainable future concept, one based on electro-mobility and autonomous vehicles,” the company said in a media statement.

“Rather than having a few, large, versatile machines – as is common on construction and mining sites today – the HX1 demonstrates the emergence of smaller and more numerous, specialist machines. This ‘elephants to ants’ concept is a new way of meeting customer needs, combining intelligent machines, automation and electromobility.”

Martin Weissburg, Member of the Volvo Group Executive Board and President of Volvo CE, added, “Although this technology may be years away from – or may never enter – production, it will undoubtedly influence our future offering and has the potential to transform the construction industry as we know it. The progress our engineers are making is exciting.”