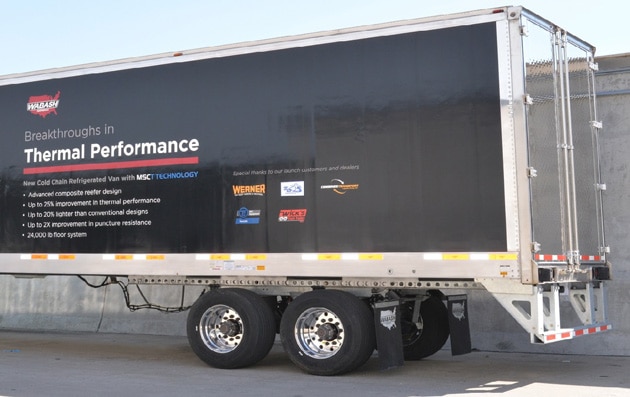 Ten months after unveiling a first prototype, Wabash National is now getting ready for the official launch of the new Cold Chain Series, a refrigerated van line based on a moulded structural composite material.

According to the US-based OEM, four North American transport businesses have already committed to trial the new product line in a move to “better understand the value of its performance benefits on their operations,” explained Brent Yeagy, President and Chief Operating Officer at Wabash National.

Leonard’s Express, Werner Enterprises, K&B Transportation as well as Combined Transport will all be part of the launch program, Yeagy announced.

“We’re excited to show the progress we’ve made since we introduced our prototype trailer in February,” added Robert Lane, Wabsh Nationals’ Director of Business Development.

“We’ve spent the past eight months in R&D undergoing further testing and qualifications and finalising repair procedures. This reefer is unlike anything on the market today.”

Wabash National’s new Cold Chain Series is made from the company’s proprietary moulded structural composite with thermal technology (MSCT), which has already been used in its previously commercialised refrigerated truck body.

The material, which has supposedly never been used in trailer building before, is said to improve thermal performance by up to 25 per cent while saving up to 20 per cent in weight.

An improvement in puncture and damage resistance is also expected, according to Wabash National.

Production and field testing for the initial launch trailers are said to begin in the first quarter of 2017.