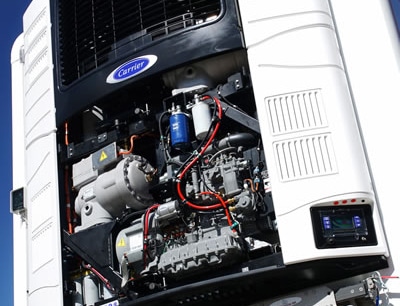 BusinessGreen Technology Awards has revealed the finalists for its Transport Technology of the Year Award, with refrigeration expert Carrier and ultracapacitor specialist Skeleton Technologies in the running.

Now in its second year, the BusinessGreen Technology Awards aims to bring together around 250 leading executives and technologists from some of the UK's most exciting clean tech companies.

“From clean energy to ultra-low emission transport and biotechnology to material science, we want to celebrate those start-ups and established technology and engineering giants who are turning the dream of a sustainable green economy into a reality,” BusinessGreen said.

Carrier has been nominated for its new generation of refrigeration units that use CO2 in a closed-loop system. CO2 is a safe and non-ozone depleting gas with a global warming potential (GWP) of one, compared to the standard refrigerant R404a GWP's rating of 3,922.

Skeleton Technologies was nominated for its Kinetic Energy Recovery System developed with Adgero. The KERS unit consists of a bank of five high-power Skeleton Technologies SkelMod 50F 160V ultracapacitors, working alongside an electrically driven axle to capture energy loss during braking and use this energy to re-power the vehicle.

The winner will be announced at the gala ceremony on 2 December at IET London, Savoy Place.