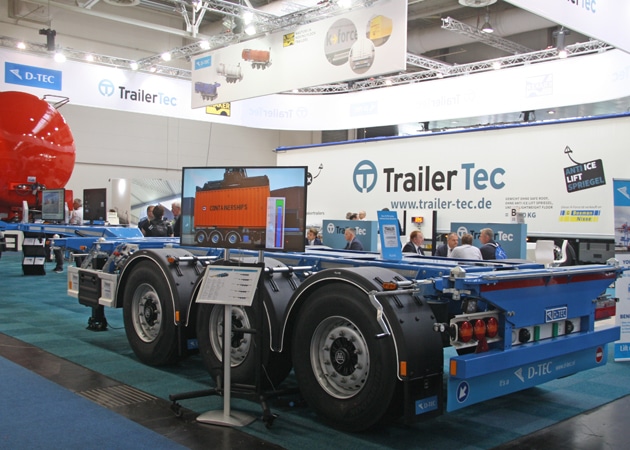 Dutch trailer manufacturer D-Tec is in the finishing stages of developing a new trailer suspension that functions without a need for hydraulic shock absorbers.

The all-new suspension system is based on the same concept that placed runner-up to BPW’s new tyre pressure control system at the 2017 Trailer Innovation Awards last month.

“We expect to introduce our first trailers without hydraulic shocks somewhere during 2017,” D-Tec Managing Director, Gerrit van Vlastuin, told Global Trailer – pointing out the system would fill a gap in the market similar technologies that are already in the United States cannot cater to, as they do not take into account the differing springing – and thus damping – characteristics in Europe.

“We expect there to be more emphasis on running costs when we try to sell our container chassis [in the future], and trailers meant for transporting manure will become lighter and cheaper to run without hydraulic shocks,” Van Vlastuin said. “With both kinds of trailers we produce we expect improved ride qualities, especially when these trailers are empty.”

Van Vlastuin added that drivers of (manure) tank trailers would especially benefit from the more stable and predictable steering experience on winding and country roads when travelling without a full load.

Regardless of the application, he said fleets can expect a decrease in tyre wear and increased fuel efficiency for the truck up front.

Developing the system alongside D-Tec are a couple of big names in the suspension business. VDL Weweler supplies the 3D-rolled trailing arm nicknamed ‘cobra’ for its unusual shape, for example, while Firestone developed a new kind of double air bellow to replace the shock absorber.

Essentially, when the wheel bounces in the direction of the chassis, extra air is forced through a valve into a second bellow chamber and then directed back through to dampen the movement of the axle. However, there is reportedly not enough space in a container chassis to house the large double air bellow by Firestone, which is why D-Tec added extra air tanks inside the chassis to provide the additional air needed. The solution would also help keep the trailers lighter, said Van Vlastuin.

With D-Tec currently finalising test schedules, more specific details and introduction dates are to come in due course.

Already on sale is an updated version of D-Tec’s Flexitrailer container chassis, which was presented at the IAA Commercial Vehicles Show last month. It is available with a new air suspension – this time featuring shock absorbers – that was also developed together with Weweler and save up to 70kg per unit.

Also in Germany, D-Tec showed off its new folding twist lock, which is set to render filling blocks obsolete, and a new closed side panel for the Flexitrailer.