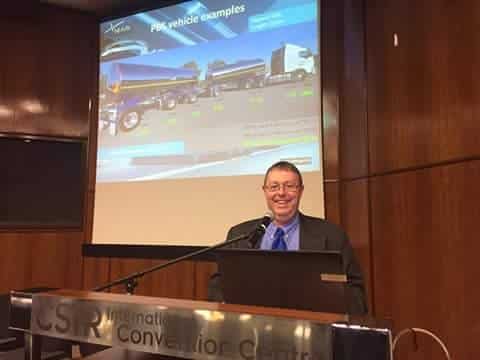 The Council for Scientific and Industrial Research (CSIR) in South Africa has staged two workshops in July on ‘Smart Trucking’, the country's high productivity vehicle scheme.

The South African Performance-Based Standards (PBS) pilot project, Smart Trucks, was launched in 2007, based on successful initiatives in Australia, New Zealand and Canada.

Guest speakers included Les Bruzsa (pictured), Chief Engineer from the National Heavy Vehicle Regulator (NHVR) in Australia, who provides engineering, technical and policy leadership on the advancement of heavy vehicle productivity and safety initiatives, primarily through the continued development of PBS in Australia.

Also speaking at the event was the CSIR’s Dr Paul Nordengen, who spearheaded the adoption and growth of the Smart Truck concept in South Africa. So far, there are over 165 Smart Trucks from 14 commercial transport operators across South Africa.