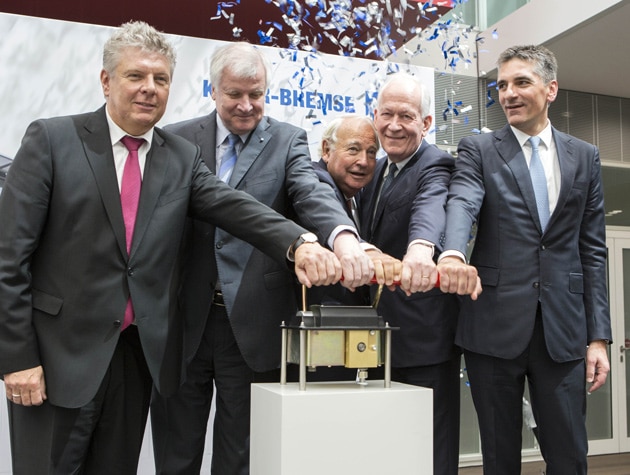 On a total floor space of 17,000m2 distributed across five levels, the new building reportedly houses some 100 state-of-the-art rigs and systems for technical testing and quality assurance as well as workplaces for 350 engineers and technicians serving both the company’s rail and commercial vehicle division.

““The Development Centre is the biggest single investment in the history of Knorr-Bremse and as such a clear statement of our belief in [the German state of] Bavaria as a technology hub,” said Klaus Deller, Chairman of the Executive Board of Knorr-Bremse AG.

“First-class technology will enable our engineers and technicians to develop and test new cutting-edge systems for tomorrow’s rail and commercial vehicles.”

“With this state-of-the-art facility Knorr-Bremse is investing in the future and setting an example for other companies,” said Horst Seehofer, Premier of Bavaria.

“Knorr-Bremse is demonstrating how we can face up to global competition and expand our region’s knowledge base. We want to be a modern, digital industrial hub, and are determined to further fine tune our technology promotion accordingly.”

Since 2010, Knorr-Bremse has invested more than €1.5 billion in developing new products and systems, as well as some €1.3 billion on establishing and expanding development and production sites around the world.

The new R&D Centre is now supposed to consolidate these efforts by providing a “space for inter-disciplinary exchange and networking” between the company’s various experts.

“The aim is to develop … a new generation of Knorr-Bremse brake control systems … to cope with complex control functions related to the increased use of driver assistance systems and automation of vehicle drive functions as a further step towards driverless vehicles.”