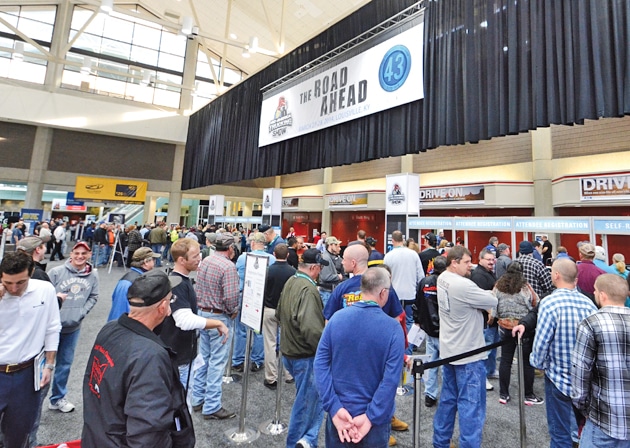 North America is likely to see a new truck show emerge in 2017.

After a range of leading truck manufacturers stayed away from the Mid-America Truck Show (MATS) in March, both Daimler Trucks North America and Navistar have now announced they will support a new industry gathering to be staged in Atlanta next autumn.

Both OEMs publically committed to a biannual show concept brought forward by Newcom Media, a Canadian publishing house that is also responsible for Canada’s Truck World expo, and Hannover Fairs, a subsidiary of Deutsche Messe, which owns the fairgrounds for the biannual IAA Commercial Vehicle Show in Germany and operates the event, even though it doesn’t own it.

Deutsche Messe is also behind the China Commercial Vehicle event in Wuhan and a series of materials handling and logistics exhibitions held under the CeMat name.

Whether or not the new NACV concept will be the place to do so is yet to be determined, though – at least if the American Trucking Associations (ATA) and Heavy Duty Manufacturers Association are concerned.

They had entertained the idea of a new national show in March, hoping to co-operate with event management and trade show firm, Messe Frankfurt – the company behind the global Automechanika brand and the Johannesburg International Truck & Bus Show.

According to Transport Topics, however, Navistar’s and Daimler’s early commitment may have put the plan on hold for now: “At this point, it is unlikely that our exploration of the possibility of a new truck show will be successful, but we will continue to look for ways to advance ATA’s position as the leading voice promoting trucking in the US,” ATA President, Bill Graves, told the news outlet.

There has been no commitment to either Show concept from the trailer industry just yet. Both Daimler and Navistar pointed out that attendance at regional shows such as MATS by local dealers or individual brands will remain at their discretion.

“While we had hoped that DTNA Corporate and Navistar would be present at the 2017 MATS, we understand that they are focusing their marketing efforts on the medium to large-sized fleets and are placing their bets with the new show.

“As we have for the last 45 years, MATS will continue to be a national show that addresses the needs of the North American trucking Industry as a whole, including small/medium-sized fleets, owner-operators and drivers, as well as suppliers and manufacturers seeking to engage with this broader audience.”