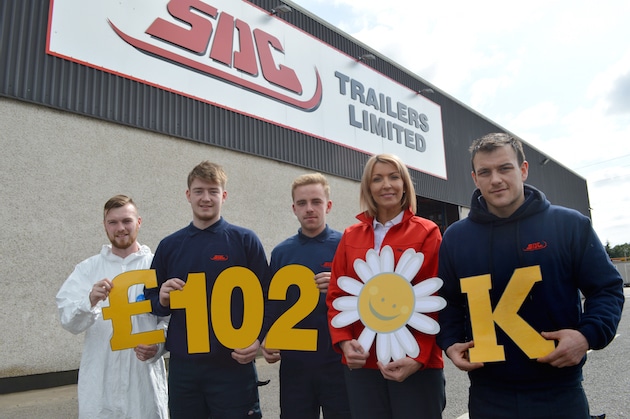 SDC Trailers in Toomebridge, Northern Ireland, has announced that the company has raised over £100,000 (€126,446) to help the Cancer Fund for Children (CFC).

According to SDC, the company has had CFC as its charity partner since 2014, raising money through a series of fundraising events such as the 2014 and 2015 Belfast marathon, a charity cycle event and a donation from SDC.

Each member of staff at SDC and staff sister company, MDF Engineering in Antrim, contributes to the donation through payroll giving.

Managing Director, Mark Cuskeran, praised the staff and the charity itself for their success.

“We chose CFC for the truly fantastic work the charity is doing in the local community. I am delighted that our staff here at SDC Trailers and MDF Engineering have been so generous in donating to the CFC charity,” said Cuskeran.

“A number of management and staff have visited CFC’s Daisy Lodge centre and been overwhelmed by the services that they provide to affected children and families. With this in mind, the board of directors decided to add a further £20,000 on top of staff contributions for such a worthy cause.”

Cancer Fund for Children reportedly provides a range of wrap-around services including one to one and group support from therapeutic specialists, short breaks at Daisy Lodge, residential weekends at Narnia and financial grants. The charity also provides support through the 'Young Shoulders Programme' to young people who are living with a parent who has cancer.