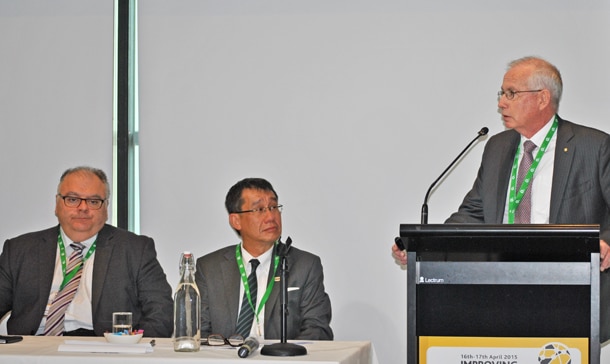 The upcoming Global Heavy Vehicle Leaders Summit in Melbourne is shaping up to become a ‘Rumble of the Regulators’.

With a fortnight to go until the landmark event in Melbourne, organisers revealed that NHVR CEO, Sal Petroccitto; TCA CEO, Chris Koniditsiotis (pictured far left) and recently re-elected ATA Chair, Noelene Watson, will all take part in a session on ‘The Power of Policy’.

To be held in the afternoon on 3 May, the high-profile meeting will be chaired by Paul Retter (pictured far right), CEO of the National Transport Commission (NTC) – making for a historic clash of Regulators with ample potential for controversy.

“Having all the key decision makers in Australian trucking on stage will make for an amazing debate,” commented Dr Peter Hart, Chairman of the Australian Road Transport Suppliers’ Association (ARTSA), which is again hosting the Summit in collaboration with BP.

“This is a unique opportunity to discuss recent events in the transport industry and actively take part in shaping the future of our industry.”

The ‘Rumble of the Regulators’ session will be followed by a VIP dinner featuring industry icons Peter Gunn and Ian Cootes.

Tickets for the event are selling fast, with final contingents now released online.