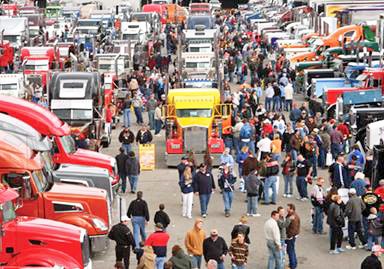 The 45th annual Mid-America Truck Show (MATS) was held over the weekend in Louisville, Kentucky, boasting an estimated 1,100 exhibitors and more than 70,000 visitors.

Although many major truck brands were not in attendance, the show was deemed a success by organisers, with the annual schedule to continue for the foreseeable future, as reported by Transport Topics.

The show instead focused on presence of trailer OEMs and equipment brands such as SAF-Holland, Hendrickson and Meritor, some of which used the show to promote new product launches and world premieres of the latest equipment and technology innovations.

In a world first, Wabco debuted its next generation OnLane lane departure warning system with video-based driver performance monitoring, while Canadian axle and suspension company, Ingersoll Axles, unveiled a new, fully integrated yoke mount suspension system with a ‘fully wrapped’ axle connection that is said to be up to three times stronger than traditional integrated offerings with a U-bolt clamping.

Utility Trailer, J&J Truck Bodies and Trailers, Trout River and ED Etnyre were among the more than 60 trailer OEMs that found exhibiting at the show worthwhile, using the space from the missing truck brands to expand on their own booths, according to Heavy Duty Trucking.