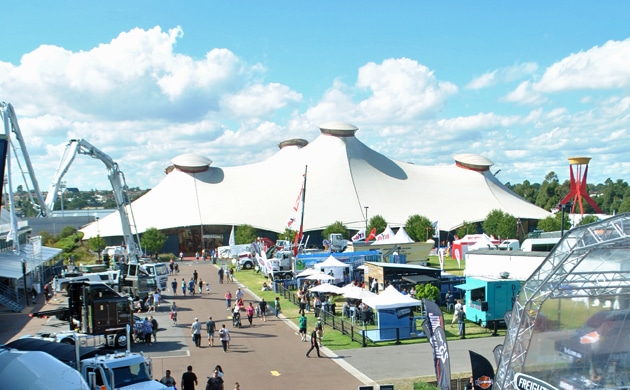 With little more than a month to go until the next International Truck, Trailer & Equipment Show (ITTES) in Melbourne, Australia, nformation surfaced that more than a dozen Australian and world premieres will be celebrated at the Show, many of them in the high-tech component field, but also in vehicle manufacturing.

One much-anticipated world premiere will be the global launch of Melbourne brand, Max Tankers. Founded by Adam Stanfield in late 2015, the young company has entered into a partnership with globally renowned tanker OEM, GRW Engineering, to distribute ADR-approved aluminium tankers in Australia.

A second world premiere will be celebrated with the launch of Thinwall Trailers to the Australian market. Representing Canadian OEM Titan Trailers, Thinwall will present a range of all-new ADR-approved aluminium trailers in Melbourne – including a walking floor semi for the waste industry and a B-double grain hopper combination. All trailers have never been publically displayed before and have been designed specifically to suit the local market.

Adding to the hype, WA’s Bruce Rock Engineering (BRE) is expected to announce its national expansion at the Show, with a much broader strategic focus and more ambitious growth target. BRE’s first-ever presence at an east coast truck show will also include the first showing of the 2016 Wabash National product range outside WA.
“Together with Wabash National, we’ve designed a special east coast spec, if you will, so the product on show will be a world premiere,” said Managing Director Damion Verhoogt.

Meanwhile, newly re-launched and rebranded Pumpa Manufacturing will be making its first public appearance at the upcoming Melbourne Truck Show since the new management team took over, promising all new equipment to be unveiled once the gates to the Melbourne Showgrounds open in May.

Also in the trailer hall, tanker special Marshall Lethlean will unveil a much anticipated new model, while New Zealand’s Swinglift will introduce a lighter tare version of its proven European and South African double stack model with Dual Carriage lift modules to the Australasian market.

On the component front, DK Thermal – a new Joint Venture between Japan’s Denso Corporation and China’s Kingtec – will see its official world premiere in Melbourne, with the young company promising the launch of several trailer refrigeration units in a much talked-about Australian first.

What’s more, Italian coupling specialist will use ITTES as the launching pad for a new, factory-direct presence in Australia, while new developments at Hella Australia and Dr Air Brake could stir up the local braking market.

For hydraulics specialist Mega Pacific, the Show will be the first public outing after a large-scale rebranding imitative, while both Redarc and Selectrix promise all new equipment to be launched in Melbourne, too.

Another highlight will be SAF-Holland celebrating 60 years of doing business in Australia at the Melbourne Truck Show. To commemorate the milestone, a delegation of global executives is expected in Melbourne to represent the company at Australia’s largest truck show.

“The Melbourne Truck Show has also been Australia’s most important launching pad for new businesses, products and strategies,” said Show Director, Simon Coburn. “To see just how many companies will be celebrating genuine world premieres in May is truly humbling and goes to show just how important this event is for the industry. Don’t miss out on the opportunity to be part of something special.”