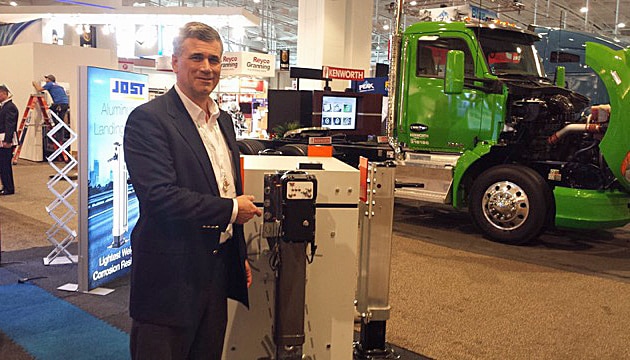 Transport equipment specialist, Jost International, has announced it will be exhibiting a new electronic landing leg drive at this week’s TMC conference in Nashville, Tennessee.

Labelled Velocity Drive, the device was developed by UK start up Intelligent Trucking Solutions (ITS) and is now distributed via Jost International in the USA and Jost in Asia.

“The Velocity Drive is an automatic landing gear solution for semi-trailers,” the company told Global Trailer. “Retrofittable to all quality landing gears, [it] eliminates the manual labour component of raising and lowering the landing gears, promoting safer working conditions for drivers and increasing fleet efficiency.

“The Velocity Drive will also increase the speed of the coupling/ de-coupling process, which allows for increased fleet efficiency and cost savings by reducing engine idle time.”

Launched in late 2014, the Velocity Drive is ITS’ response to the emerging trend of automating the lifting and lowering process of landing gear in a move to turn it into a more proactive safety feature.

Jost International will be supplying the new product in North America and continue to promote its new distribution partnership with ITS as part of its upcoming trade show efforts in North America.

Distribution partners for both Europe and Australia are supposed to be announced shortly.