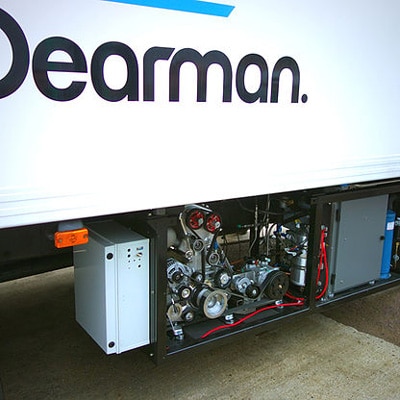 The first on-road UK trials of a zero-emission transport refrigeration unit powered by a liquid air engine are likely to start within the next six months, according to the Society of Motor Manufacturers and Traders (SMMT).

“Compared with the first Dearman liquid air engine, unveiled in 2014, the latest one is claimed to be 30 per cent lighter, 30 per cent smaller, and 30 per cent more efficient,” SMMT said.

“The liquid is first vaporised in the refrigeration unit’s heat exchanger, cooling it down. Then the high-pressure gas is used to drive the engine’s crankshaft. This could in turn be coupled to a conventional refrigeration compressor, or for auxiliary power,” SMMT explained.

According to Dearman, the refrigeration system has also been reconfigured, downsizing a number of components and optimising them to deliver maximum efficiency and higher levels of performance.

Dearman also announced that £16 million had been invested in the business by Park Vale Capital, a big multinational private equity firm.