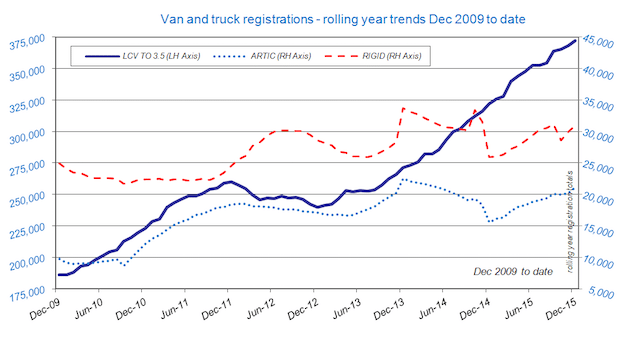 UK commercial vehicle (CV) demand reached an all time high in 2015, according to figures released by the Society of Motor Manufacturers and Traders (SMMT).

A steep curve in growth since 2012 has seen the CV market overtake pre-recession levels, SMMT revealed, with a total of 423,894 vehicles registered in 2015.

According to SMMT, growth was fuelled by the van sector, where demand, buoyed by the ongoing online shopping boom and attractive finance deals, hit record levels – up 15.6 per cent to 371,830 registrations in 2015.

Trucks also showed robust growth in a return to form for the sector, with registrations up 25.5 per cent to 52,064 units, following a slower year in 2014 after regulatory upheaval resulted in a distortion of fleet renewal patterns, SMMT reported.

Mike Hawes, SMMT Chief Executive, said, “This is excellent news for the commercial vehicle industry, and indeed the economy, with registrations of both vans and trucks posting strong gains, up 16.7 per cent in total on 2014.

“CV demand is a key barometer of UK economic confidence and the market’s strong growth in 2015 was particularly encouraging. However, with these record figures in mind, we will expect to see the market levelling off slightly in 2016.”