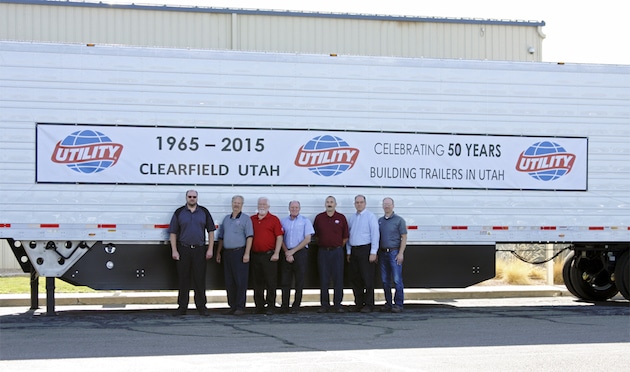 US company Utility has begun celebrating its 50th anniversary of manufacturing trailers in the state of Utah.

The company’s presence in Utah began with the purchase of a US Navy supply warehouse in the small town of Clearfield, north of Salt Lake City, in 1965. Initially converted to build both dry and refrigerated vans, in 1982 the plant expanded and was updated to focus exclusively on refrigerated vans.

Adjacent to this facility, Utility production began at a larger manufacturing plant specifically for its 3000R refrigerated van in 2000, and production has since increased from 31 to 64 trailers a day.

“We implemented a moving assembly line, introduced a mandrel foaming process, automated the manufacturing of aluminium side panels and installed a multi-head seam welding floor tractor. These capabilities improved safety, increased efficiency and established a standard of product quality that makes the 3000R the best selling reefer in history.”

According to Utility, the trailer builder is one of Utah’s largest employers, counting 1,160 staff members.

“We had a special steak luncheon for the employees to celebrate this milestone and handed out some gifts as part of the event,” Smith added.

“The Clearfield community would like to thank the Bennett family for placing this facility here. Utility has been a great employer and multiple generations of families have worked and are working here.”