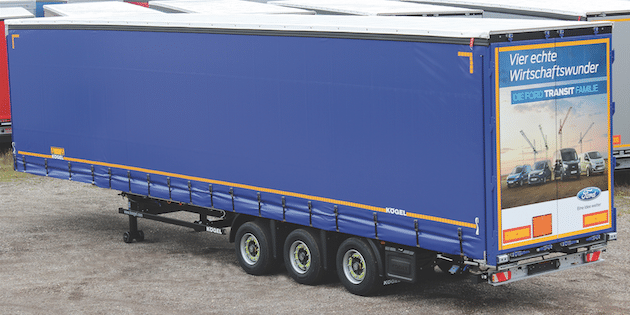 The delivery included 52 Mega trailers and 20 Cargo trailers, and will reportedly be used primarily in procurement logistics for automotive suppliers to the Ford works and for just-in-time material transport between the Ford factories within Europe.

The Mega trailer model has a tare weight starting at 6.5 tonnes, and complies with the permissible overall height of four metres by combining tyre choice and a reduction in the semi-trailer throat from 90 to 55 millimetres.

The trailers reportedly have equipment such as heavy-duty lashing rings reinforced to a tensile force of 4,000 kg per ring for RoRo and reversing warning system with automatic braking function.

According to Kögel, the Mega trailer’s wheelbase regulator uses the EBS to measure the axle load and automatically lifts the last trailer axle if the trailer is not fully loaded or has been partially unloaded, automatically displacing weight from the king pin on the tractor unit to the first and second axles on the trailer.

The Kögel Cargo trailers also reportedly offer a high loading capacity and a high fifth-wheel load, with a tare weight of approximately 6,000kg without accessories.