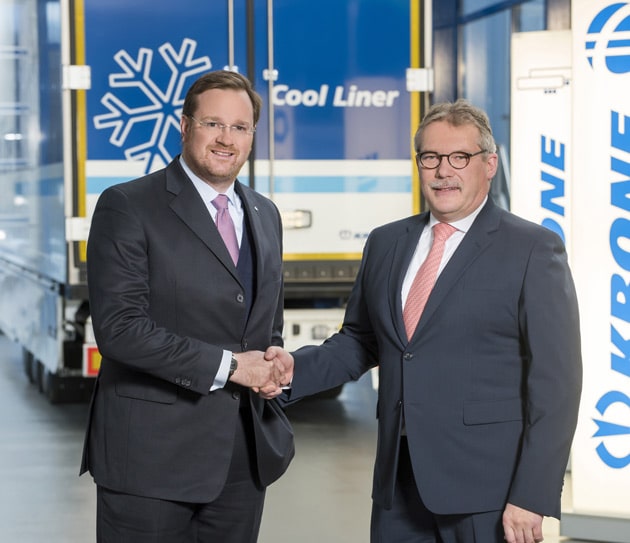 After three decades of co-operation between the two family business, German OEM Krone has announced its merger with swap body specialist Brüggen.

According to Krone, the two companies are set to create the new Krone Commercial Vehicle Group, which will also include existing Krone subsidiaries such as Gigant Axles, Krone Used, the trailer factory in Turkey as well as various sales and distribution companies around the globe. Sales revenues for the new Group will add up to about €1.8 billion.

“We are delighted that we will be working even closer with our expert partner and personal friend of so many years, Bernd Brüggen, in the future,” commented Bernard Krone, Managing Partner of the Krone Group.

“This decision was taken with the full agreement of the Brüggen and Krone families, because the merger will enable our combined enterprise to meet future challenges with greater resilience. After all, Brüggen und Krone have been engaged in fruitful collaboration with each other for many years now; so you might say that, after a 30-year engagement, it’s now time to tie the knot.”

Bernd Brüggen, owner of the Brüggen Group, said: “More than 30 years ago, Dr Bernard Krone and I agreed to enter into a very close partnership. He gave me his personal word, and that has been the basis of our shared growth and success. For many years now, our Herzlake and Lübtheen factories have been manufacturing Krone swap systems as well as Krone Cool Liner and Dry Liner box trailers.

“As there is no family successor waiting in the wings at Brüggen, I am very pleased about the forthcoming merger of our company with the Krone commercial trailer division. This will secure the long-term future of the two operations. I am obviously very pleased about this and immensely grateful to the Krone family for their sense of social responsibility.”

As a result of the new alliance, the two companies will merge systematically and strategically. According to Krone, a plan has been drawn up under the working title Progress 2020 whereby all production sites (Werlte, Herzlake, Dinklage, Lübtheen and Tire) will be integrated to share the same product architecture, organisational structure, production processes and IT system.

“The new Krone Commercial Vehicle Group forms the groundwork for further sustainable and profitable growth on an international scale and in an increasingly competitive marketplace,” explained Bernard Krone.

“The Krone, Brüggen and gigant brands will continue as before, but we will be able to use synergies more efficiently, for example in development, production and procurement.”

Krone is reportedly planning to invest €50 million in its Werlte plant, as well as other locations, to set up the combined business for the future.

Subject to antitrust approval, the earliest date for the new structure to take effect is 1 January 2016.

The new organisational structure will see Bernhard Brüggen, Aloys Schnelte and Gero Schulze Isfort join the Board as Managing Directors. The current CEO of the commercial trailer plant at Werlte, Bernard Krone, and the CEO of the Krone Group, Alfons Veer, now step up to the administrative board.