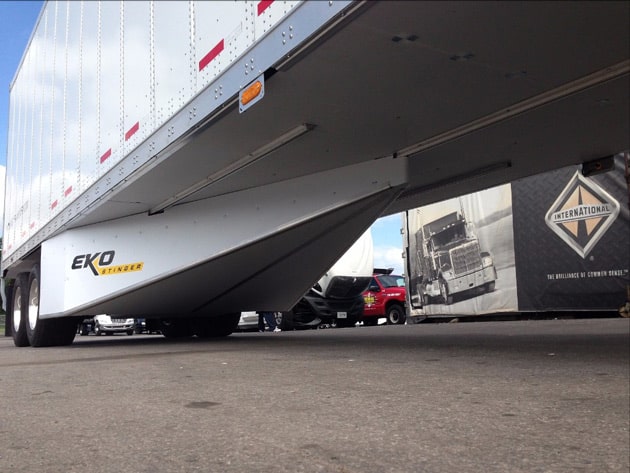 US start-up EkoStinger is trying to break into the booming North American trailer aerodynamics market with a movable under-carriage device.

The arrow-shaped structure is mounted in front of a trailer’s axle group to divert airflow around the axles, suspension and wheel section.

The structure is mounted on tracks to enable the sliding, and also features a long plastic sheet that covers the frame rails and cross members to reduce turbulence there.

“Our patented system moves with [the axle group], keeping the aerodynamics consistent through the full range of motion, saving fuel at all tandem placements and trailer loads,” the company explained. “The cross member cover … protects the bottom of the trailer from road debris, snow, salt and corrosion.”

The company claimed its SmartWay verified and CARB-approved device would lead to improvements in fuel consumption between four and six per cent, while adding some 134kg to the total weight tally.