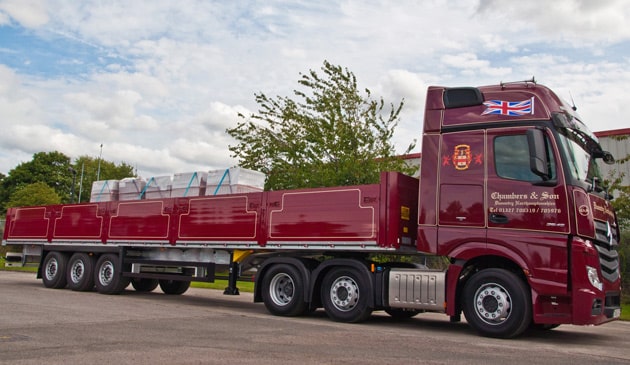 Northamptonshire-based C&S Transport has taken delivery of the first Schmitz Cargobull brick-carriers to be sold in the UK.

The construction materials haulier, which is located in Daventry and runs a mixed fleet of 15 vehicles, said the new brick-carriers will operate five days a week and are set to cover between 120,000km and 150,000km annually.

“The new brick-carrier trailers are just what we have been looking for and are purpose-built for this industry,” commented Craig Chambers, C&S Transport Director.

“We operate in a sector of transport which really works its assets hard. This requires equipment which can cope not only with the heavy loads, but with the demands that delivering to construction sites brings.

“We do our own regular maintenance and servicing, but if the product isn’t up to scratch in the first place, it means very little. With Schmitz Cargobull we know we get a good solid trailer and that’s why we keep coming back for more.”

The brick-carriers feature 10 aluminium drop-side walls and stanchions, which are shorter and lighter than others on the market, reportedly allowing for a greater payload. The sidewalls and stanchions are removable, allowing the trailer to be converted into a flatbed.

The stanchions and drop-sides are mounted to Schmitz Cargobull’s latest generation Modulos chassis, which features a modular design with the frame construction using bolted rather than welded components.

The galvanised, reinforced chassis, built around the cold formed single piece I-beams, has been designed to carry up to 25 tonnes on a six-metre loading length for high point loads and comes equipped with 15 pairs of five tonne heavy-duty lashing rings.