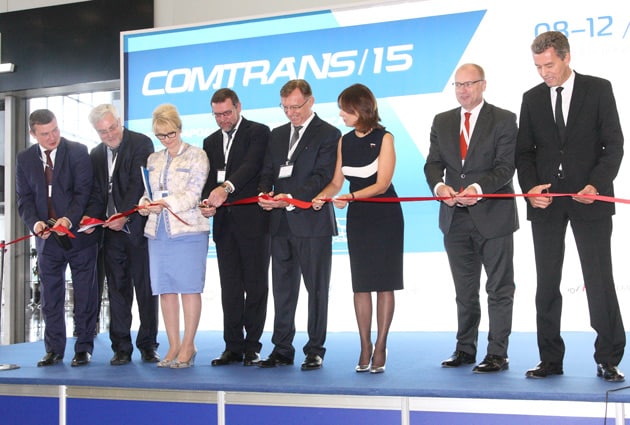 According to ITEMF, more than 16,000 visitors travelled to the outskirts of Moscow between 8-12 September to meet some 220 exhibitors at the famed Crocus Expo Centre.

“Comtrans 2015 has once again demonstrated its position as the leading trade fair for decision makers in the commercial vehicle and transport industry in Eastern Europe,” the organisers said.

Even though attendance lagged behind the record year of 2013, Show Director Sergey Rybchak commented, “Despite the current significant depreciation of the commercial vehicle market in Russia, there was a lot of interest on the part of the trade fair visitors.”

Despite the difficult market situation in Russia, international exhibitors showed a particularly strong presence, as Rybchak pointed out.

“In the medium term, the western European as well as the Asian commercial vehicle manufacturers and suppliers are continuing to see a great potential for their products in Eastern Europe, and they emphasizse this with their participation in Comtrans”, said Peter Bergleiter, Managing Director of IMAG, the international partner organization of ITEMF Expo.

While Russian truck OEM Kamaz stole the show in Moscow with its Italian designed ‘Transformer’ study, boasting a cab fully equipped with touchscreens and a novel electromagnetically suspended driver seat, the trailer industry saw a showdown between local manufacturers like Grunwald, Chaika and Istok and international OEMs such as Schmitz Cargobull, Krone, Wielton, Kässbohrer, CIMC and Koluman.

German familt business Krone stood out by showcasing a  specially designed curtain-sider for the Russian market, boasting some 2.73m of additional load length – the equivalent of six euro pallets.

“After the positive experience in recent years … ITEMF Expo is expecting continued cooperation with the Russian association OAR and the international association of the automotive industry OICA.

“The next COMTRANS is expected to take place at the Crocus Expo Center in Moscow in September 2017,” Show Director Rybchak concluded.