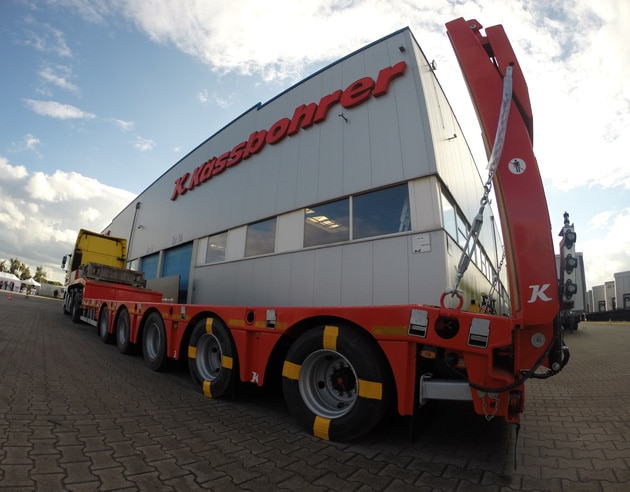 Kässbohrer has staged a live demonstration of its much talked-about Steer-by-Brake (SBB) system in Germany last week.

Developed in collaboration with Knorr-Bremse, the system was designed to “eliminate the need for self-steering axles” and reduce the constructional complexity of heavy transport equipment.

In Germany, trailers with more than three axles that are used for heavy and abnormal goods transportation have to be equipped with self-steering axles to fulfill the turning radius requirements defined in ECE-Regulation 79.

Initially introduced at the IAA Commercial Vehicle Show in late 2014, Kässbohrer's new system will help transport businesses overcome that restriction and is now ready for volume production, according to Kässbohrer Board Member Iffet Turken.

In hosting the event, Turken explained that because the SBB system is built on the existing trailer electronic brake system (TEBS) architecture, using it could reduce the Total Cost of Ownership of a traditional low-loader dramatically, not only in terms of initial investment, but also tyre wear and maintenance.

The system is able to tap into the TEBS platform to control the air suspension during cornering and selectively break the inner rear wheel of the last axle, thus transferring the effective wheelbase forward and allowing the rearmost axles to slip sideways through the corner.

“The TEBS system automatically configures the suspension and braking systems to achieve the desired cornering radius when the trailer enters a tight turn at low speed. As the axles are fixed, there is no need for the user to lock the axle for alignment while reversing as in the case of a self-steering system. There is also no need to lock the axles at high speed thus stability is maintained even in the case of a failure in the electrical system.”

Turken also used the occasion to stress that Kässbohrer’s commitment to technology and innovation will continue in the future.

“Kässbohrer has the highest growth rate among the top five low-bed semi-trailer manufacturers in Germany, Poland and the Netherlands; and has increased … sales by 32 per cent in Europe during the first eight months of 2015,” she added.