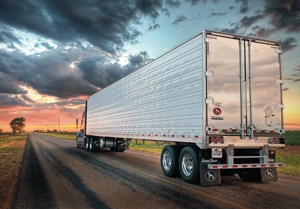 Research company FTR said that the US trucking industry could be facing an “unprecedented range of outcomes” if economic or regulatory forces triggered capacity utilisation to swing ten percentage points in either direction.

“A swing of just five per cent is enough to dramatically impact pricing in the marketplace,” said Noël Perry, Senior Transportation Economist at FTR.

“A swing of ten per cent – that would be a disruptive event, for both transport executives and supply chain professionals. There will be companies with their heads stuck in the sand; you don’t want to be one of those companies.”

Perry said a major negative force is the growing chance of recession, “looming over a recovery that is clearly getting old and increasingly buffeted by the bad economic news coming from many global sectors.”

While he explained it was not an event that can be readily identified in advance, “the chances for it will be increasing.”

He added a second force was the developing wave of new safety regulations that, if enacted, would push capacity utilisation to the 100 per cent level.

“Of course, the two forces could counteract themselves if they occur at the same time. However, that is a problem because it would produce historically high capacity utilization during a downturn.

“That may be good for truckers, but supply-chain pros will find it very difficult managing reduced budgets in a tight truck market. In addition, the ensuing recovery would likely strain the supply chain system to such a degree that shortages and price spikes would still be liable to occur.”

Capacity, regulations and the overall economy will be part of the discussion at FTR’s annual Transportation Conference, held from 15 to 17 September in Indianapolis.