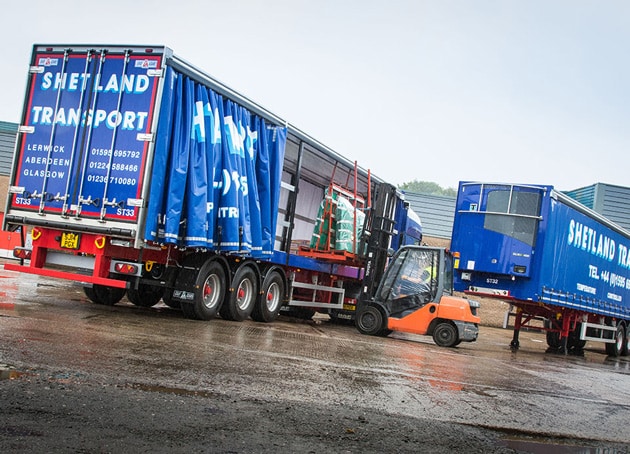 Shetland Transport, the 2015 Scottish European Haulier of the Year, is expanding its fleet of insulated curtain-siders with new equipment built by Gray & Adams.

According to Shetland Transport founder and Managing Director, Hamish Balfour, the company had been using refrigerated vans in the past and only just returned to using the more flexible curtain-sider design.

“Prior to taking delivery of our first two Gray & Adams insulated and refrigerated curtain-siders in 2014, it had been some 15 years since we’d last operated this type of product,” he commented – revealing that the latest order consisted of three units, with another four currently in production.

Balfour explained that the 13.6m trailers will join a fleet of nearly 100 semi-trailers and will be used on regular runs between Shetland’s headquarters in Lerwick and depots in Aberdeen and at Coatbridge, near Glasgow.

They feature specially strengthened chassis, which prevent them from buckling and bending in rough seas during the 12-hour ferry crossing, and come with heavy-duty insulated curtains ensure temperature integrity as well as providing the all-important side access loading capability that Balfour values so highly.

“Most of our outbound loads are of salmon, and other fish, but we also carry a certain amount of what I call ‘ugly’ freight, by which I mean products which are particularly long or big and bulky,” he said. “Its easy access side-loading capability makes the curtain-sider particularly well suited to this type of work.”