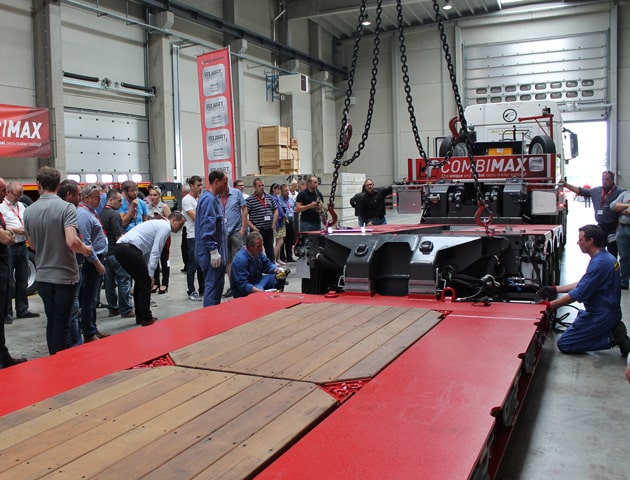 Especially the modular CombiMAX model left a lasting impression, according to Faymonville, which had a team of mechanics on duty that  converted a 3+5 low bed combination with an intermediate platform into an eight-axle semi low loader with add-on beam live at the premises.

“Faymonville has caught the spirit of the age with the CombiMAX concept, [which combines] modularity, flexibility, speed and efficiency,” the company said.

Also on show was the company’s PrefaMAX model, a so-called ‘inloader’ for the transport of precast concrete.

The variant shown in the Belgian town of Büllingen was telescopically extendable and suitable for carrying over-sized concrete elements.

“This PrefaMax from Faymonville is an absolute world’s first,” the company said. “It can be extended in various steps up to 4,000 mm, [which] allows for a maximum load length of 13,500 mm. This is … the answer to the progressive developments in the concrete and building industry.”

At the demo day, Faymonville also premiered the new MAX510 model from sister company MAX Trailer, a low bed semi-trailer that is meant to drive the brand’s international expansion.