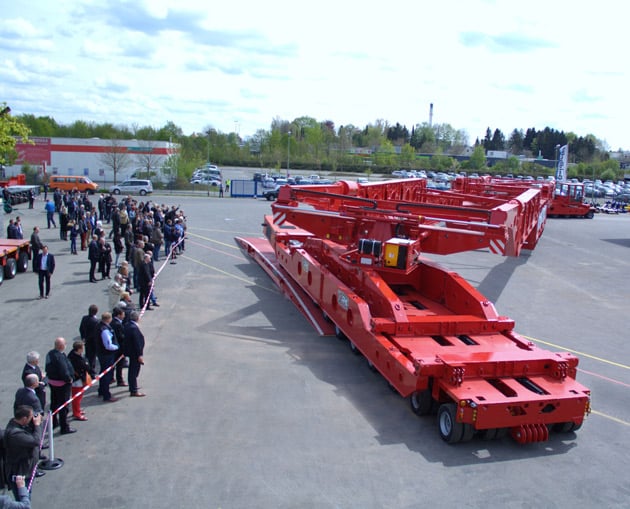 Built in co-operation with fellow German company Greiner, which specialises in the development and manufacture of lift systems and bridges, the unit can boast a maximum payload of 600 tonnes and a distributed axle load of less than 12 tonnes.

According to Goldhofer, reducing the axle load to such a low figure is a “unique achievement” in European trailer building as permissible axles loads across the continent continue to be reduced for safety reasons.

“This project is really unique in the heavy-duty logistics industry,” said Goldhofer CEO, Stefan Fuchs, during a ceremony held at the company’s Memmingen plant.

The bridge, which has a span of over 52 m and a total length of about 89 m, has reportedly been designed for a maximum configuration of 2×24 axles and a load-bearing capacity of up to 550 tonnes.

According to Goldhofer, the unit can be used as a side girder deck, a vessel bridge, a high girder bridge or a self-supporting transformer transporter. In addition, the bridge girders can be used independently as a 36 m fly-over bridge.

“Thanks to the various options offered by our new bridge, we will be more frequently able to take the fastest route for the job without any detours. That saves time and money and allows us to respond to customer requirements with greater flexibility.”

According to Goldhofer, the bridge width is infinitely adjustable between 1620 and 6200 mm (clear load width). Vertical stroke in the loading section is 2145 mm. The bridge is used in combination with Goldhofer’s heavy-duty modules from the THP series and the brand’s hydrostatically powered self-propelled PST/SL-E transporters, with the option to increase the number of axle lines from 2×10 to 2×24 (split and parallel combinations).