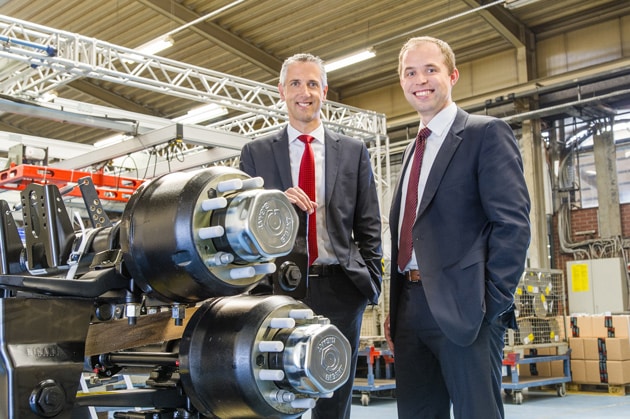 German axle company Gigant has announced an ambitious expansion plan that will see the family business produce some 300 axles a day by 2018.

To handle the extra workload, the Dinklage-based company acquired some 38,000m² of additional land right next to the current production site, which has been in the same location since 1974.

Seven years after the last major extension of the facility, the company said it planned to build a new 3,200m² structure that will allow it to maintain its “market and customer orientation”.

According to Managing Directors Markus Gehle and Alfons Veer (pictured), the move is part of Gigant’s ‘g300’ strategy, which will also involve the creation of 70 new jobs and apprenticeship positions – an increase by almost 50 per cent.

“The first foundation stones are already in place,” the duo commented – referring to the construction of a new apprentice workshop, upgrades to existing machinery and extensive modifications to the company’s IT system.

“Ground-breaking for the new building valued at a high single-digit million figure is scheduled for autumn 2015, so that production can be ramped up from the beginning of 2016.”

Since 2013, Gigant – still a legally independent company – has been a member of the Krone Group and helped develop the OEM’s new in-house axle and suspension offering.