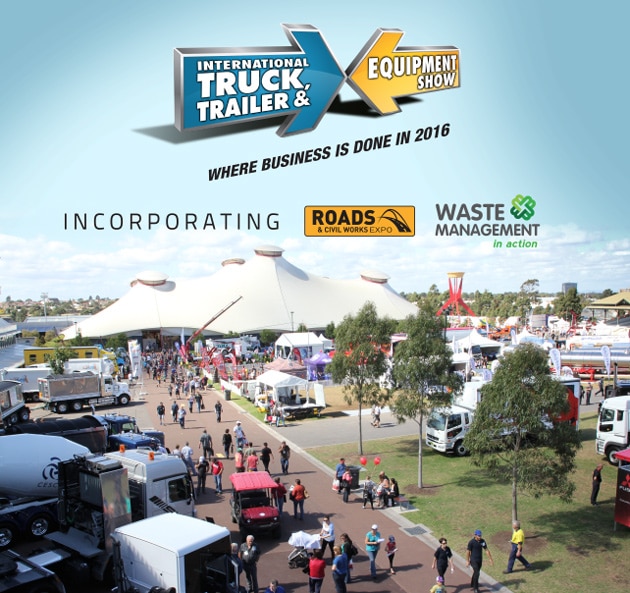 The International Truck, Trailer & Equipment Show 2016 (ITTES) has officially been launched today, with new Show Director Simon Coburn promising a truck industry event unlike anything ever seen in Australia.

The 2016 edition of the internationally acclaimed event will take place from 5-7 May 2016 in Melbourne and aim at becoming the first Australian truck show to attract 500+ exhibitors and break the 40,000 visitor mark.

Two new shows launched
To achieve the ambitious goal, Mr Coburn and his team have made some substantial changes to the show set-up – the most prominent one being the introduction of two additional shows to complement the existing exhibition.
In conjunction with the International Truck, Trailer & Equipment Show as we know it, Coburn has added a dedicated Roads & Civil Works Expo to the mix, as well as a stand-alone Waste Management exhibition.

Derived from industry feedback
“The very first thing we did after wrapping up the 2014 show was to go out there and start collecting industry feedback,” Mr Coburn said in a media brief published today.
“In doing so, we quickly realised that you can’t just stick to a proven concept if you want to continue to grow the exhibition. It’s been an eye-opening process and helped us refine our vision for what a modern truck event should look like now and in ten years’ time.”

Committed to growth
According to Coburn, the addition of two dedicated sister events to ITTES was a necessary step to do justice to a changing transport and logistics landscape. “In a time where mining activity is waning and Australia’s economy has to re-invent itself to remain competitive, I believe we all have a certain responsibly to help shape the future of our country,” he commented.
“ITTES 2016 can certainly contribute to that – by opening up to a new, high-growth industry sector like waste management, and giving the infrastructure and civil works community a forum that will allow it to interact directly with the truck market. We bring together all the missing parts to create an environment that will actively encourage collaboration at a scale never seen before in Australia.”

Uniting the industry
Mr Coburn said the 2016 Melbourne show will also become the first trucking event to be endorsed by all major industry associations in Australia – making it the ideal environment to “jointly lay the foundation for sustainable growth” in our country.

“In 2016, we want to change the game for good and redefine what a truck show should be. It should be a place where we do business, but it should also provide room to learn from each other and nurture the next generation. That’s a powerful proposition, and the support of all major industry associations shows we’re onto something big.”

Exhibition space is available for sale now, with pre-launch enquiries already being considered.

The full interview with Mr Coburn is available online now.

• The next ITTES will be held in Melbourne from 5-7 May 2016 to avoid clashes with major events scheduled in March and April.
• The Show will be complemented by a dedicated Roads & Civil Works Expo and a stand-alone Waste Management exhibition.
• The 3-in-1 event aims to attract 500+ exhibitors and more than 40,000 visitors in 2016.
• The next ITTES will again include a Moving Display zone and a Test Track where guests can experience the latest equipment in action.
• ITTES will also include a special Education and Careers Pavilion to inform the next generation about the variety of careers available in the transport and industry logistics community.
• To honour the event’s 10th anniversary, ITTES will again include a Show and Shine Competition and display a Heritage Truck collection.