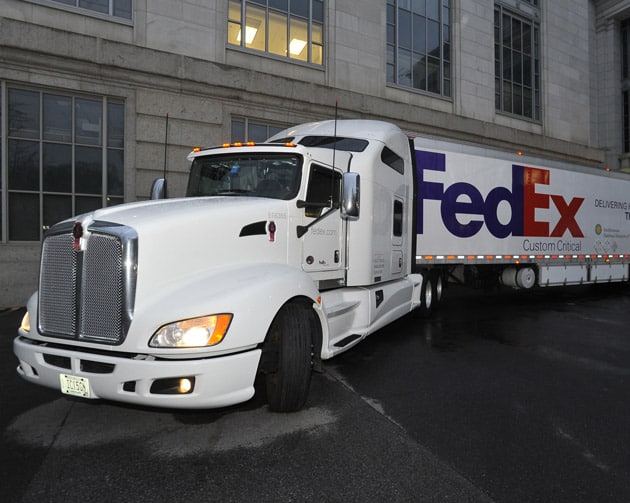 As players, fans and coaches enjoyed Super Bowl XLIX on Sunday, one special guest of honour arrived via FedEx.

As the Official Delivery Service Sponsor of the NFL and the Super Bowl, the US transport company was responsible for the delivery of the famous Vince Lombardi Trophy – marking a milestone in the festivities surrounding what is widely known as the Big Game.

“Every day, more than 300,000 FedEx team members around the world pack, ship and deliver a wide variety of precious items for our customers,” Patrick Fitzgerald, Senior Vice President, Integrated Marketing and Communications.

“We are honoured to play a role in commemorating this marquee sporting event with the delivery of another iconic and precious item, the Vince Lombardi Trophy, to Arizona in time for Super Bowl XLIX.”

The historic trophy, which was handcrafted by artisans at Tiffany & Company, is made of sterling silver and depicts a regulation-size football in kicking position on a pyramid-like base that features the words ‘Vince Lombardi Trophy’ and ‘Super Bowl XLIX’ along with the NFL shield.

Richard Bauer, a Phoenix-area resident and FedEx Express courier for 17 years, made the final delivery to NFL Experience with the help of former NFL player and Super Bowl XXXIV champion Torry Holt.

The trophy arrived in an all-electric vehicle, which is part of FedEx’s EarthSmart program designed to guide the company’s environmental commitment in the communities where it operates.

During its journey, the one-of-a-kind trophy was monitored by a technology called SenseAware, which tracked its location, as well as environmental factors such as temperature and humidity. SenseAware also monitored for light detection, which would indicate if the package was opened before its arrival in Phoenix.

On Sunday, the trophy was then awarded to the New England Patriots, commemorating the team’s fourth Super Bowl championship.