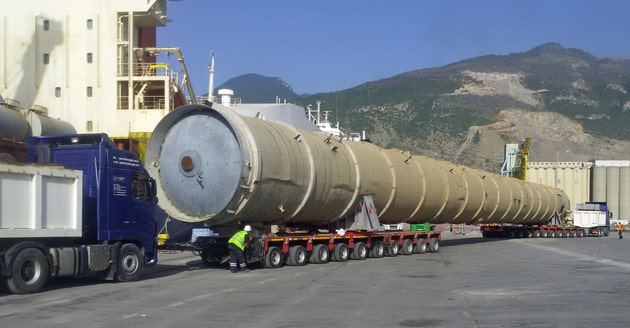 Turkish heavy haulage specialist Botros-Yigit-Nata (BYN) has finalised the move of a 247-tonne refinery boiler from the port in Iskenderun to a refinery in the oil-rich city of Erbil, Iraq – setting a new record for oversized freight haulage in the Middle East.

The 62m boiler was first shipped from Jebel Ali in the United Emirates to the Turkish port of Iskenderun. From there, BYN’s specialists took the huge load by road over a distance of 1150 km to its final destination in Erbil, using a combination of two Goldhofer ten-axle THP/SL heavy-duty modules.

According to Goldhofer, it was the first time a load of this size had ever been transported to Iraq via Turkey in a single operation. The journey from Iskenderun to Erbil lasted a total of 20 days.

“Everything went smoothly. We spent six months planning the project and performing a detailed inspection of the roads down to the very last bend. Once we had the permits for the journey, it was simply a question of the reliability of our Goldhofer modules. And they did not let us down once,” commented BYN General Manager Aydin Fatah.

“It’s gratifying to see customers place their trust in our technology for the really challenging missions and break new ground in the process,” said Stefan Fuchs, CEO of Goldhofer Aktiengesellschaft.