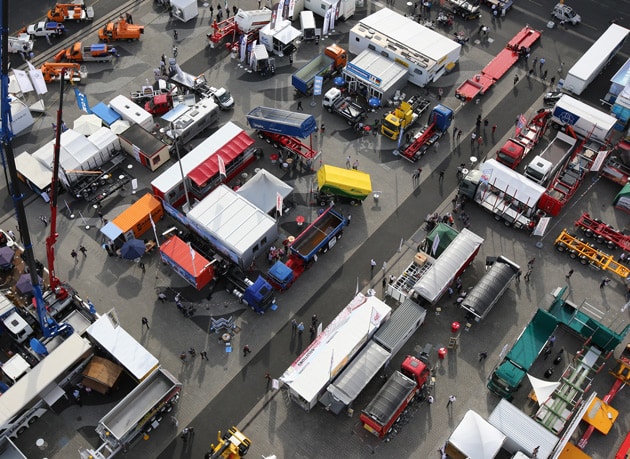 The 2014 IAA Commercial Vehicle Show in Germany has officially come to an end last week, but for many in the industry, the work has only just begun.

Despite continued slow growth in Europe’s trailer market, the competition in Germany is more severe than ever, with Schmitz Cargobull and Krone taking the lead – followed by Kögel, Kässbohrer and Austrian powerhouse Schwarzmüller, who all compete for third place.

All three used the 2014 edition of IAA to announce plans to contest the leading duo, focusing on smart new technology and a comprehensive service offering. Up-and-coming brand CIMC Silvergreen, meanwhile, has taken a step back and was not present with a stand at the IAA show.

While the competition mainly focused on upgrading a tried and true portfolio, Schmitz Cargobull went all in to present a new curtain-sider generation based on a completely redesigned, fully bolted chassis. Kögel, meanwhile, showcased a range of over-dimensional vehicles to display just how far productivity can be stretched within the local legal framework.

One main trend seen in the re-shuffled OEM scene was a renewed focus on service, with the actual product taking a supporting role only. Krone, for instance, deliberately chose not to let a vehicle take centre stage in the north of Germany, but celebrated the company as a one-stop-shop instead.

Branding has become immensely important in that context, with OEMs like Krone and Schmitz Cargobull placing high value on client retention and creating brand loyalty. In line with the automotive industry, both now offer a variety of distinctly branded genuine parts, for example.

“The aftermarket is an important part of the business and a powerful revenue source, so it’s only natural OEMs are trying to tap into that potential,” an industry expert told Global Trailer in Germany. “Naturally, this will change global supply dynamics in the long run and force OE suppliers to become more inventive to retain visibility in the transport market.”

Stealing the show of the powerful OEM posse was the axle market. Following Schmitz Cargobull’s example – the company introduced its very own Rotos product to the market in 2005 – both Krone and Kögel presented new captive OEM axles in Germany.

While Krone’s KTX model will be produced by recently acquired subsidiary Gigant and is readily available on the German market, Kögel’s take was shown as a prototype only. Also on the axle front, Jost used the IAA exhibition to announce the acquisition of Mercedes-Benz Trailer Axle Systems.

To complete the surge of axle-related news, Fuwa K-Hitch pronounced the acquisition of Dutch axle brand, Valx, while fellow Dutch company VDL Weweler presented an updated version of the famed Modular Bolt-on Suspension (MBS) – after conventionally rolling and forging the trailing arm, it is now being 3D rolled and formed.

Using a unique three-dimensional metal shaping process, the new generation will be available for both round and square axle beams to address the entire bandwidth of the transport market.

Industry powerhouse BPW, meanwhile, followed the OEM lead by proclaiming it will now focus on providing a comprehensive transport solution rather than a stand-alone product, while SAF-Holland reacted to the growing competitive pressure by introducing two new variants of the classic Intra range, enabling it to compete on the high-end market as well as in the low cost segment.

The Intra S series can reportedly save up to 10kg per axle and will compete in the price-sensitive low cost segment, where more and more captive OEM products challenge established suppliers like SAF-Holland. Meanwhile, the Intra R model will cover the high-end segment of the market and feature SAF-Holland’s new Safe Guard design to protect the brake cylinder.

“The new SAF Intra S features a reduced, but extremely sturdy suspension arm for vehicles like curtain-siders,” Steffen Schewerda, head of SAF-Holland’s Trailer Systems Business Unit, said in Hanover. “[Meanwhile,] the SAF Intra R has been developed for rigid frame vehicles like tankers and tippers. It was important to SAF-Holland that the new spring we used for this model fits perfectly in the existing dimensions and the vehicle manufacturers make no changes to their chassis.”

In line with the company's new “Inspired by Passion” mantra, SAF-Holland also displayed a prototype of a new carbon fibre axle and a new aluminium composite drum that can reduce the weight per axle by up to 30kg. In addition, SAF-Holland showed a new pneumatic drum brake called SAF-Direct, which could save operators up to 20kg per axle.

Just in time for the 2014 show, telematics – the industry trend that owned the headlines in 2012 – reached a new level maturity, with global businesses like Knorr-Bremse, Wabco and BPW now offering high technology that will bring a new level of transparency to the industry.

Schmitz Cargobull also won an Award for the development of a new telematics system based on Knorr’s iTap product, allowing the driver to access trailer data via a mobile app.

Read a full report including all IAA highlights in the next edition of Global Trailer magazine.