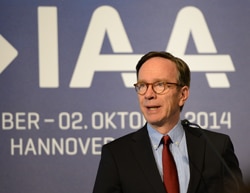 The 2014 IAA Commercial Vehicles in Hannover, Germany, has officially kicked off for the 65th time with Federal Transport Minister, Alexander Dobrindt; State Premier of Lower Saxony, Stephan Weil; and the Mayor of Hannover, Stefan Schostok; joining President of the German Association of the Automotive Industry (VDA), Matthias Wissmann, at the opening ceremony attended by more than 600 high-ranking guests.

“The 65th IAA Commercial Vehicles is ready to open – and visitors can expect a large number of exciting innovations. A total of 322 world premieres will be on display at the world’s most important trade fair for mobility, transport and logistics,” Wissmann said.

“The entire commercial vehicle world will meet in Hannover. Another nine per cent rise in the number of exhibitors to 2,066 – from 45 countries – is also good.

“Of course the IAA focuses on the new heavy commercial vehicles and vans. Yet the great proportion of commercial vehicles’ value-added generated by the suppliers is revealed by another figure: the suppliers alone will unveil 226 world premieres at this IAA – which is 70 per cent of the total. And the manufacturers of trailers, bodies and buses are also present with a great many innovations. Alongside the 322 world premieres, the IAA will host 78 European and 52 German as well.”

According to Wisemann, the top 10 foreign countries strongly represented are headed by China with up to 200 exhibitors, followed by Italy with 137 exhibitors and Turkey with 113. Other countries to showcase will include the Netherlands, France, Sweden, Poland, the United Kingdom, the USA and Belgium. Argentina, Estonia, Malaysia and Tunisia are also represented.

Several special shows and activities are sure to create interest at IAA – including test drives in 21 electric vehicles on the trade show grounds, and in 54 conventional commercial vehicles on public roads. Commercial vehicles can be experienced in action on the “Innovation Stage” at the open-air site north of Hall 26.

VDA officials also added that further highlights included the numerous classic trucks, US trucks, buses, construction vehicles and trailers, which will be on show in Hall 22.