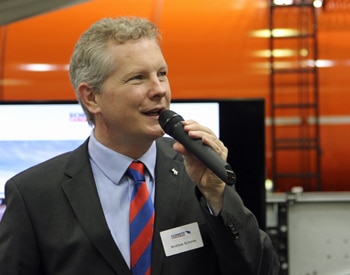 Schmitz Cargobull’s new trailer plant in Wuhan, China, will commence production just in time for the opening of this year’s IAA trade show in Germany, the company announced.

“We are exactly on schedule”, Board Member Andreas Schmitz said in in a recent statement. “There have been no delays and the collaboration with the Dongfeng Motor Group is proving fruitful.”

Mr Schmitz himself has been in China since mid- 2013 to oversee the set up of the €100 million investment. “We will be using Chinese suppliers and, in some cases, suppliers we also work with in Germany,” he said, stating the automotive hub of Wuhan would be the ideal location for the young Joint Venture.

According to Schmitz Cargobull, the company’s team in Wuhan will grow from 40 people in 2013 to about 250 at the end of 2014, including some 20 employees from Germany.

“The employees in China will receive similar training to their colleagues in Europe to prepare them for their new roles,” Schmitz said. “There will be intensive training covering the entire value chain from sales to development and order processing through to production. In the process, Chinese employees have received several weeks of training in Germany.”

According to Schmitz, the company arrived just in time to service the developing Chinese trailer market. “Approximately 90 per cent of Chinese transport companies are still owner-drivers. There is almost no specialisation for specific types of transport,” he said.

In line with that evaluation, production and sales will initially commence with “robust trailers” designed to take on many different tasks at once, he added, indicating those more durable models will also be sold to Mongolia, Russia and across Asia.

Schmitz is expecting medium and large-scale transport companies to emerge over the medium term that will eventually require specific types of trailers.

The company will compete with about 400 registered OEMs and around 2,000 unlicensed small manufacturers, aiming at a 10 per cent share of the market. Schmitz said the annual market volume was between 175,000 to 200,000 trailers; with the Wuhan plant being able to produce up to 40,000 units per year.

The European and US competition also urging into the market does not worry the German powerhouse at this stage. “From our own experience, we know that entering the market requires a long period of preparation,” said Andreas Schmitz, adding he intended to use the brand’s head start to expand its market share.