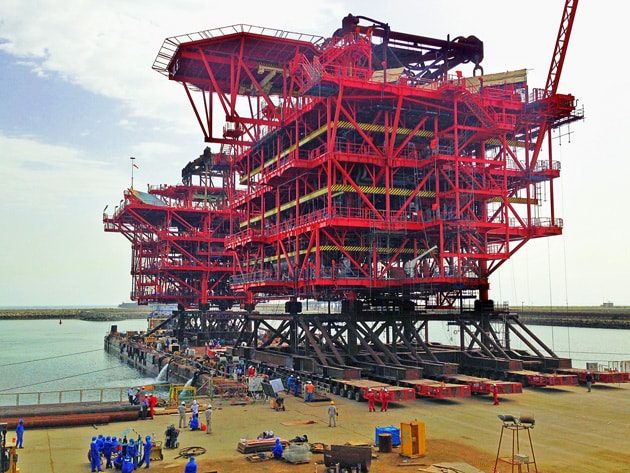 Transport company Lift & Shift Engineering Middle East (LSEME) has successfully handled one of the largest and heaviest loads ever transported in the Sultanate of Oman.

Using a steerable Nicolas SPMT unit, the company transported five offshore decks and a bridge from a factory yard in Sohar, Oman to the Umm Lulu Development Project located some 30km northwest of Abu Dhabi in the United Arab Emirates.

Each deck weighed between 2,2000 and 3,600 tonnes, with the 85m bridge element coming in at 570 tonnes. To not take a risk, LSEME assembled a team of technicians and engineers from Oman, India and UAE to handle the complex operation.

“WHT 6, the heaviest of the modules, was an especially challenging transport as it was executed in the evening and with fading light,” Nicolas said in a statement. “[But] he highly skilled LSEME team managed to finish the job without incidents.”

According to Nicolas, the main challenge to overcome was the high centre of gravity of each deck, but the rough underground also proved difficult to handle once the transport was underway.

Reportedly, LSEME opted for the Nicolas SPMT model because of its low driving height. Carried out in different stages, the job took two years to complete; from finding the right SPMT layout through to loading and unloading the modules onto special barges.

All up, a total of 152 axle lines of Nicolas’ MHD SPE unit were in use, driven by seven PowerPacks.