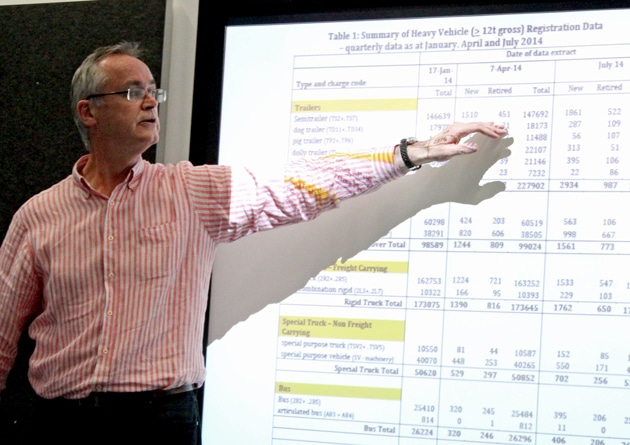 The report will be part of a series of quarterly publications documenting the size and make-up of the nation’s transport equipment industry and is building on a set of raw data first presented at the Global Truck & Trailer Leaders Summit in Melbourne in April.

The first edition of the report is available online and shows that registrations of trailing equipment in Australia are on the rise, albeit slowly.

According to ARTSA, there are currently 149,028 semi-trailer registered in Australia – 0.95 per cent or 1,336 units more than in April and 1.6 per cent more than in January 2014, when the Association first began collecting registration data.

Meanwhile, the amount of new semi-trailers joining the listing rose by 23 per cent over the last quarter, from 1,510 to 1,861 units.

‘New’ trailers are those built in 2012, 2013 and 2014 that have been registered for the first time, according to ARTSA CEO Robert Perkins, who said the report will also share an overview of ‘retired’ vehicles that are no longer registered.

“The percentage changes between quarters reflect the fluctuation in total numbers, meaning there are new vehicles added and some are retired,” he added. “We have to take those details into account when interpreting the data and treat the stats with caution.”

At an ARTSA meeting held in Melbourne, Mr Perkins also noted the Association will provide data on sub-categories such as dog trailers, pig trailer and dollies.

New dog trailer registrations, for instance, went up a solid 33 per cent between April and August. After setting new additions off against retired equipment, the total fleet grew by one per cent to 18,351 units.

ARTSA has also published an accumulated ‘trailer’ figure including all sub categories, adding up to 229,845 units in August. Compared to April, that’s a 0.85 per cent increase. Looking at new registrations alone, the last quarter saw 23 per cent more trailers registered than the one before (2,934).

The publically available version of the report also comments on the average age of Australia’s trailer fleet and showcase how many units of each year of manufacture are currently in the market.