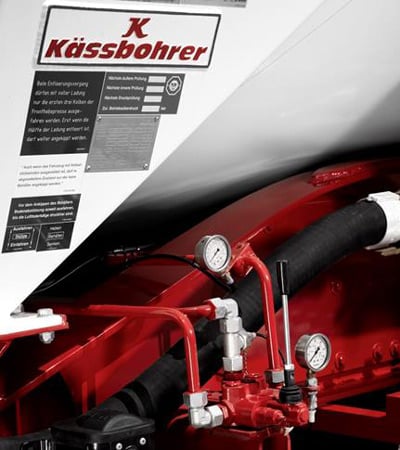 German trailer builder Kässbohrer will present its new ‘Steer by Brake’ (SBB) system at the IAA Commercial Vehicle Show in Germany next month.

The SBB system was first shown at a media event in Germany, installed on a classic five-axle low loader model. It is able to utilise the TEBS unit to brake the fifth axle one-sidedly, calculating the steering angle by comparing the different wheel speeds on each side. The first axle is liftable.

According to Kässbohrer’s Volkan Akinci, the company tested some 30 different configurations over the course of three months to find a solution that would help it waive the old mechanical steering system.

On the media day in Munich, Kässbohrer also announced it will showcase a new rear under-run protection device at the IAA. The aluminium-based devise is using an impact-resistant material also common in the defence industry. While the system won’t be available before 2015, Kässbohrer is confident it could positively affect a fleet’s insurance rating.

Driven by the plan to become Europe’s third-largest trailer brand “in the medium term”, Kässbohrer will use the IAA to unveil its new ‘Mega’ curtain-sider model, which was optimised for the intermodal market, and a two-axle, extendable load loader with a hydraulic steering system. A tipping silo (pictured) and a chemical tanker will also be on show.