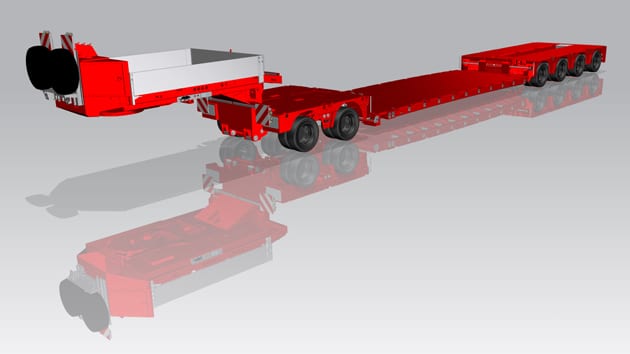 German heavy equipment specialist Doll has announced it will present a new ‘panther’ model at the upcoming IAA Commercial Vehicle Show that can be converted into a semi low-loader.

To be shown in Hanover, Germany, the six-axle low-loader will feature a detachable two-axle dolly to achieve a payload of about 70 tonnes at a minimum loading height of 780mm.

What’s new is that the trailer can easily be modified into a semi low-loader with a loading height of 850 mm by lifting the extendible low-bed by 45 cm and mounting it between the dolly and the rear axle.

“When extending, the low-bed platform can ideally be positioned either behind the dolly or in front of the rear axle’s running gear,” according to Doll. “The dolly itself can be loaded on the low-bed after removal, which replaces the second man when driving empty.”

The compensating gooseneck is said to make the trailer suitable for three-axle trucks too.