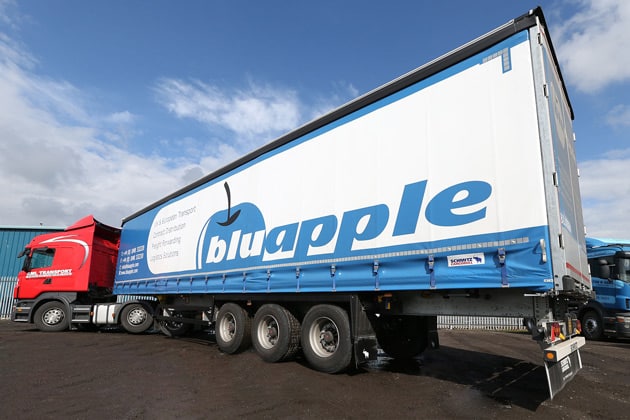 Scottish logistics provider Bluapple has picked up a brand new Schmitz Cargobull aluminium fixed-roof curtain-sider, after a successful factory tour in Germany by the firm’s director in March.

The trailer, which has been supplied in Bluapple’s striking livery, will be used for a variety of general logistics operations across the UK, and is expected to cover more than three quarters of a million miles during the next five years.

Bluapple Director, Pete Hannah, took the decision to buy after visiting the Schmitz Cargobull factory in Altenberge. “We’re expanding, so we’ve been looking to remove some rented trailers and replace them with fully-owned assets.

“After travelling to the factory and seeing the quality of the work that goes into manufacturing the trailers, I was convinced that a Schmitz Cargobull would be a good buy.”

Pulled by a Scania R 480 Highline, the trailer is the first new Schmitz Cargobull curtain-sider Bluapple has acquired since 2008.

Fresh from the factory and now operating from Bluapple’s depot in Scotland, the curtainsider is carrying a variety of loads, ranging from paper and packaging, to white goods, soft drinks and building products.