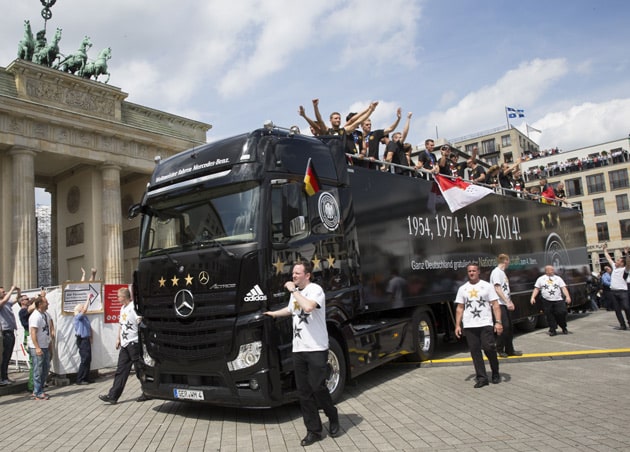 Hundreds of thousands of jubilant Germans welcomed their triumphant national football team home in Berlin on Tuesday, waving flags and wearing the national colours as they basked in the nation’s fourth World Cup victory.

Yet only few of them realised that it was German trailer specialist Krone who made the team’s slow cruise through the jam-packed city centre possible.

Krone’s engineering team had less than four days to create the ‘rolling stage’ carrying the 23-strong German squad from the capital’s Tegel airport to the Brandenburg Gate, pulled by an all-black Mercedes-Benz Actros.

Reportedly, Krone assembled the company’s most experienced tradesmen to turn a standard Cool Liner model into a moving stage and celebrate the first time a reunified Germany has been world champion, with West Germany having won the trophy in 1954, 1974 and 1990.

“Our highly motivated team was able to handle every design challenge on the spot, even while the vehicle was still under construction – all to ensure we would finish the project in time for the team to get back,” Krone said in a press release. Watch a video of the build here (German).

According to Krone, the team had to weld in a stabilising mezzanine floor, design a set of custom handrails for added safety and smoothen the exterior trim to allow for the final vinyl wrap, which was completed in Berlin over the weekend.

“Daimler’s request came at short notice but we tried everything to make it happen – and I believe we have met the challenge like a world champion would,” owner Bernhard Krone commented.

On Tuesday, nearly half a million revellers packed Berlin’s fan mile – a 1.3km stretch of road running from the west of the capital up to the iconic Brandenburg Gate – to see the truck in action. Many more lined the streets in the city centre along the team’s route.