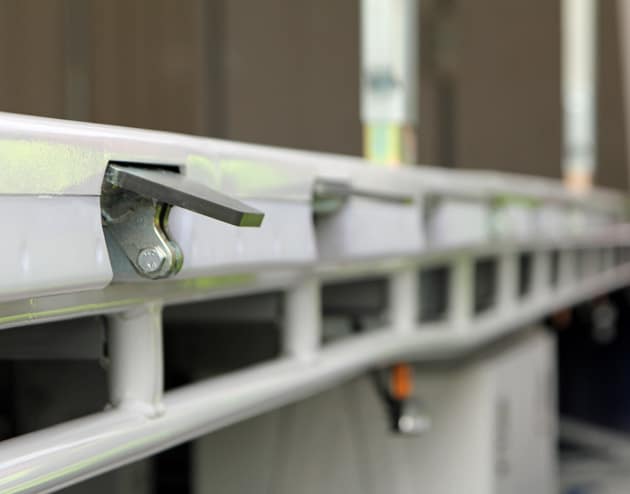 Australian trailer expert, Freighter, has revealed a new automatic curtain fastening system that can open and close a load restraint curtain at the switch of a button – even in windy conditions or on uneven surfaces.

The new AutoHold system is based on a series of metal hooks woven into a load restraint curtain that interlock with a row of steel pedals, which are seamlessly integrated in the trailer’s coaming rail.

As opposed to existing technologies that have been pushing the innovation bar in the trailer community for quite some time now, the new Freighter system is pneumatically operated.

But according to Freighter General Manager, Mario Colosimo, the key to the new system is a special sequential closing system, which will avoid malfunction in windy conditions, when the curtains are prone to move away from the hooking system.

“After the button is pressed, the curtains begin to fasten sequentially, starting from both ends of the trailer and quickly working inwards, pulling the curtain closer to the trailer as they go,” said. “By the time the final catches fasten, the centre of the curtain has been pulled right in next to the trailer, removing the chance of missed catches.”

At the Melbourne launch, Mr Colosimo estimated AutoHold could save operators around 15 minutes per stop – greatly increasing operational efficiency, leading to more drops per day and less stress for the driver on top of what is likely to be a distinct safety advantage.

“We’ve been careful when introducing this new piece of technology, to ensure that it is as failsafe as possible,” he said. “We’ve designed a simple pneumatic control system with proven industry components to ensure that everything just works and that there are no nasty surprises for operators.”

Mr Colosimo continued, “Together with pneumatic unfastening, fastening is operated by a spring return, assisted by pneumatic control and with an over centre lock to fully secure the locked position.”

As a further failsafe – should drivers ever get stuck without access to air – the curtains fasten via a spring return system.

Freighter said it will make two versions of the AutoHold available for sale – one model with curtain buckles and one model without. “This comes down to operator preference,” said Mr Colosimo. “While some operators will prefer the buckle-less model for its clean appearance, many others will see the benefits of the buckle model.”

He added that customers should not be put off by the buckles as they would rarely need to be handled at all.

“The buckles are there for tensioning adjustment only,” he stated. “Once the curtains have been tensioned initially, drivers will only need to use the buckles on the rare occasion the LoadHold curtains need to be re-tensioned. By installing buckles, we can make this a quick and easy process for users to ensure the LoadHold curtains retain their load restraint compliance without the need for tools or mechanics.”

By contrast, trailers without buckles need to be taken into a workshop from time to time for simple adjustment to check and retain load restraint compliance.

Freighter said the AutoHold has been developed as a result of customer feedback, with driver safety becoming more and more of a focus for transport operators.