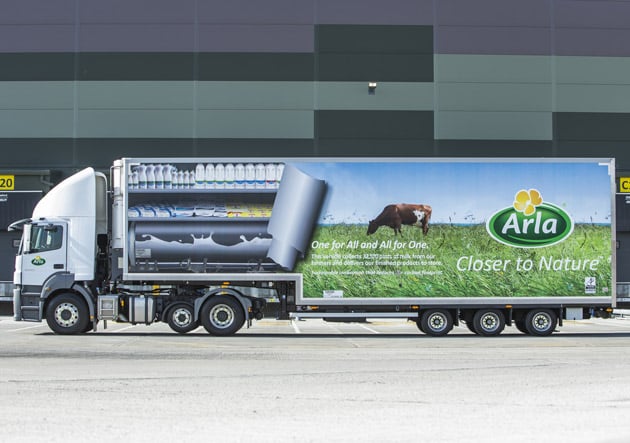 Arla Foods, the UK’s largest dairy cooperative, has become the first company to trial a new technology developed by Carrier Transicold where the refrigeration unit is also used to run ancillary equipment.

Arla’s new concept trailer – half refrigerated body, half milk-collection tanker – is using Carrier’s Vector 1550 City refrigeration unit to power the milk-collection pump motors at the back – effectively eliminating the need for a power take-off (PTO) on the truck

Carrier Transicold tested, modified and developed new wiring configurations and software to establish an ‘export power mode’ on the fridge, allowing the driver to disable the temperature control system for a short period of time to allow power to be routed to the milk tanker pumps.

“Our 2020 sustainability strategy is to reduce our overall CO₂ output by 34 per cent, with logistics responsible for delivering a third of this reduction,” said Peter Bradbury, General Manager National Fleet, Arla Foods UK.

“We saw an opportunity to make the combination trailers even more efficient, using electricity generated by the Vector refrigeration unit to power the motors when loading and discharging raw milk.”

Since commencing a 12-month field trial in December 2013, the first proof-of-concept trailer has successfully reduced vehicle complexity and cut capital investment per tractor unit and trailer combination. The pumps are now powered by the Vector 1550 City unit’s 1.5-litre engine, versus the 11-litre truck engine used previously. This cuts diesel use per full load of milk from 3 litres to 1 litre, with the potential to save 1,460 litres per trailer per year, according to Carrier.

“The technology behind the export power mode makes the real possibility of enabling Vector-equipped trailers to be even more efficient, versatile and indispensable in the future,” said Justin Grace, Managing Director, northern Europe, Carrier Transicold. “This could include powering moving decks, tail-lifts and even tyre pressure inflation systems.”