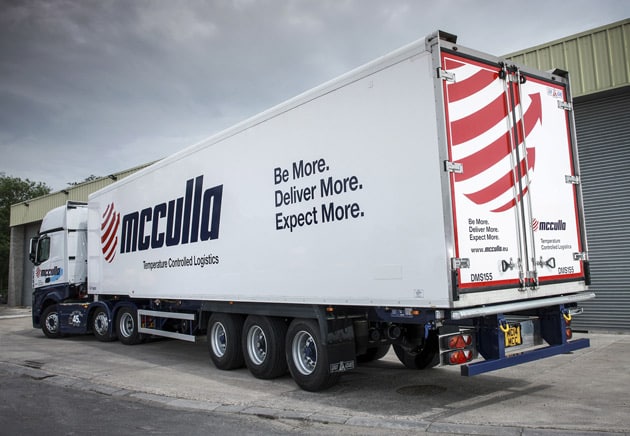 The UK company first unveiled the new cappings at the Commercial Vehicle Show 2014 in Birmingham. They are more aerodynamically profiled than its previous, standard one-piece cappings, a feature that helps reduce diesel consumption.

Impact-resistant and bonded to prevent moisture ingress, the cappings are also designed to accommodate the high-visibility tape that is now a statutory requirement in the UK.

The trial vehicle is also equipped with ThermoKing’s SLX-e Spectrum multi-temperature refrigeration unit and advanced TouchPrint temperature recording system. In another ‘first’ for McCulla, it has a roof-mounted vortex generator, which manages the airflow over the back of the trailer while, to further boost economy, it is also shod with low rolling resistance Generation 3 tyres from Continental.

“We do everything possible to maximise fuel efficiency and thereby minimise the impact of our operations on the environment,” McCulla’s Operations Director, Brian Beattie, commented.

“First impressions of the new trailer are excellent – in a back-to-back comparison with conventional trailers on the same work it appears to be cutting diesel consumption by as much as five per cent.”