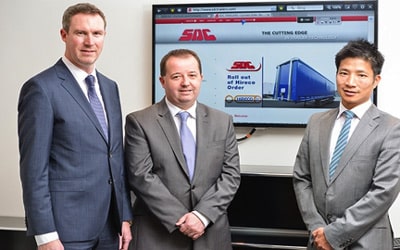 The trailers – including a range of box vans, double-deck step-frame curtain-siders and urban trailers – will be manufactured across SDC's three engineering facilities in Toomebridge, Antrim and Mansfield over the next six months.

According to SDC, the order indicates positive growth in the UK’s transport and logistics market, with 600 new trailers being added to the Hireco fleet alone.

“Hireco have been a great customer of ours through the years and I would like to thank them for choosing SDC once again,” said SDC Managing Director, Mark Cuskeran.

“We have been working closely with Hireco to ensure their specific requirements are always met and this has allowed us to form a great and sustainable partnership. We operate in a very competitive market where quality and customer service, as well as our on-going drive to keep our production costs low have ensured continued success. Our reputation is built on over thirty five years of design expertise, and quality accredited manufacturing standards.”

Cuskeran said this order comes at an exceptionally successful time for the company,y which has invested in its staff, training and boosting employment. In February, the company also announced a £1.25 Million order from Saudi company, the Rezayat Group.