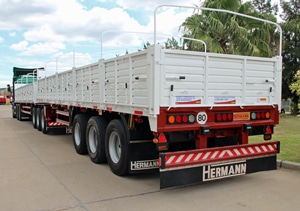 Argentina has officially embraced the concept of high productivity vehicle design with the national approval of B-doubles last week.

President Cristina Fernández de Kirchner surprised the trucking community last Wednesday with the announcement that a piece of legislation authorising B-doubles to operate nationally had been signed.

According to Dr Alejandra Efron, Vice-President Central and South America at the International Forum for Road Transport Technology (IFRTT), the legislation will allow for high productivity vehicles measuring up to 30.25m in length to operate on Argentine roads. The total gross weight per combination would be limited to 75 tonnes.

“In a moment where many provinces were pressed to enact similar legislation, the fact that now there is a national one they can adhere to is extremely helpful,” she said.

However, Efron also said the battle for implementing the legislation has just started. “As in many countries that authorised these [vehicles] before Argentina, it won’t be a stroll in the park.”

With half a year to go until HVTT 13 – an international symposium for road transport technology – will be held in San Luis, Argentina, the announcement couldn’t come at a better time, according to Efron.

“[Strong industry] presence at the next HVTT13 in San Luis, the province that first legislated Bitrains use in 2008, will certainly reinforce and help disseminate benefits and experiences in the region.”

B-doubles are also known as Bitrains or B-trains locally and operate as Interlinks in South Africa.