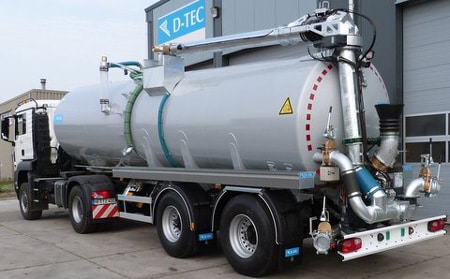 Dutch company D-TEC has recently delivered its first double-axle tank trailer to German company Ziegelmann. In combination with a 4×4 truck, the new model was designed to increase manoeuvrability both on and off-road.

“Ziegelmann asked us to consider a trailer with a low tare weight and maximum deployability,” D-TEC said. “The trailer was produced on the basis of the D-TEC philosophy that all concepts are developed to actually increase profitability.

“For the customer, this is a trailer that can be deployed optimally, and for D-TEC it is an expansion of its product range.”

The custom-built trailer is also fitted with a 'container arm' to reduce loading and unloading times. “A 30 cubic metre tank trailer can now be unloaded in three minutes,” D-TEC said. “This produces considerable cost savings when transport distances are short because many more trips can be made.”