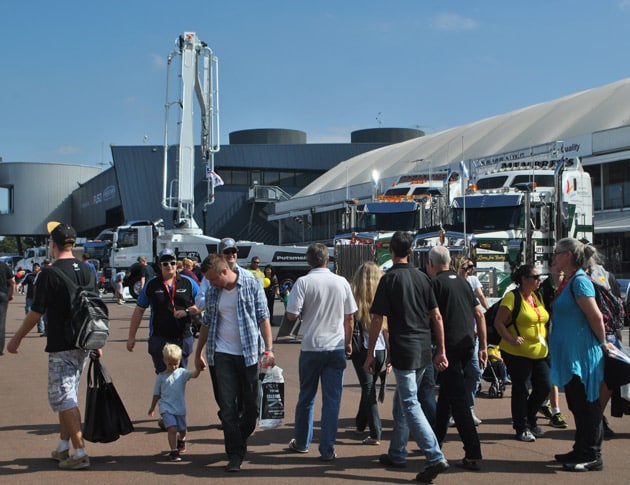 Visitor numbers are just below the magic 40,000 mark, according to a first estimate Show organisers published today. Show Director, Clint Hendry, said 39,500 exhibitors, trade and public visitors flocked to the Melbourne Showgrounds over the course of the four-day event – equating to six per cent increase over 2012.

According to a post-Show survey conducted by ITTES, a noticeably higher number of key decision makers from around the country were in attendance at the Show, and the percentage of visitors from interstate and regional centres has also increased compared to the last edition.

For the first time in the event’s history, ITTES also opened on a Sunday to accommodate drivers and fleet personnel – boosting the Show’s standing as a family spectacle. Hendry said the extra day also allowed ITTES to promote trucking as a highly skilled, future-oriented and professional industry segment to the wider public.

However, it has not yet been confirmed whether or not the four-day model will be continued. “We are still waiting for all exhibitors to reach a verdict before determining if the Sunday session will happen again in 2016,” said Hendry – pointing out that industry feedback will be crucial for future planning.

“Initial feedback has shown that ITTES indeed has an affordable space advantage, enabling truck and trailer manufacturers to showcase complete product line-ups instead of having to focus a single model, and allowing customers to see a large amount of vehicles and equipment at the same time,” he added.

The further development of moving displays and live product demonstrations proved to be a “huge hit” with visitors and exhibitors alike, who generated enquiries and closed orders on all four days, according to the ITTES survey. The opportunity to experience equipment live in action also helped buyers make purchasing decisions on the spot, the survey said.