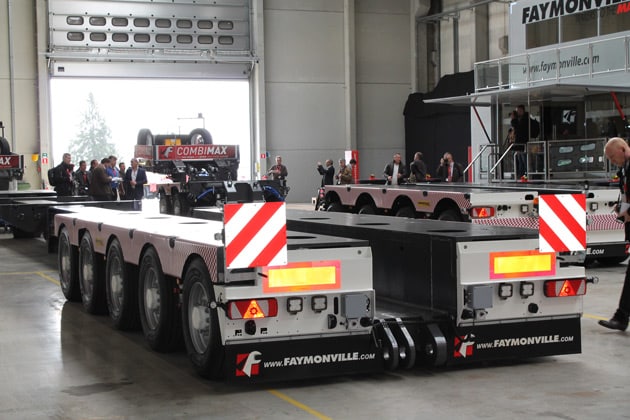 Faymonville has revealed the new CombiMAX series last week, which will allow the Belgian company to bring modular production systems inspired by the automotive industry to the low loader market.

According to Fayonville, the move to a more modular production system has been a strategic decision that will bring a “nearly revolutionary expansion” to the business. Until today, the company had been working according to the ‘built to order’ principle, focusing on tai¬lor-made solutions that were precisely matching its clientele’s wishes.

“This resulted in a product range of 14 basic models … that has become increasingly complex – after all, there are more than 3,000 possible vehicle chassis with lengths of between eight and 60 metres, and a dead weight between six and 44 tonnes,” CEO Alain Faymonville stated.

“Up until now, this has been the right philosophy,” he added. “[But] the complexity of the range is reaching its limits.”

According to Faymonville, the CombiMAX series was developed as an inexpensive complementary product line and will not replace the custom-built equipment.

“The principle of modularity is already being applied to heavy load vehicles, but so far it has not been rigorously imple¬mented with pure road vehicles,” Faymonville explained. “Modularity and thus versatility are now being transferred to Faymonville’s core product, i.e. to the trailers and step-frame semi-trailers for medium to heavy payloads of between 60 and 250 tonnes.”

Faymonville added an impor¬tant reason for the development of the CombiMAX series was the EU-wide harmonisation of vehicle registration regulations, with axle loads set to be limited to a maximum of 12 to 14 tonnes.

The company also said transport businesses using the new vehicle will be able to rearrange the set-up according to the task at hand.